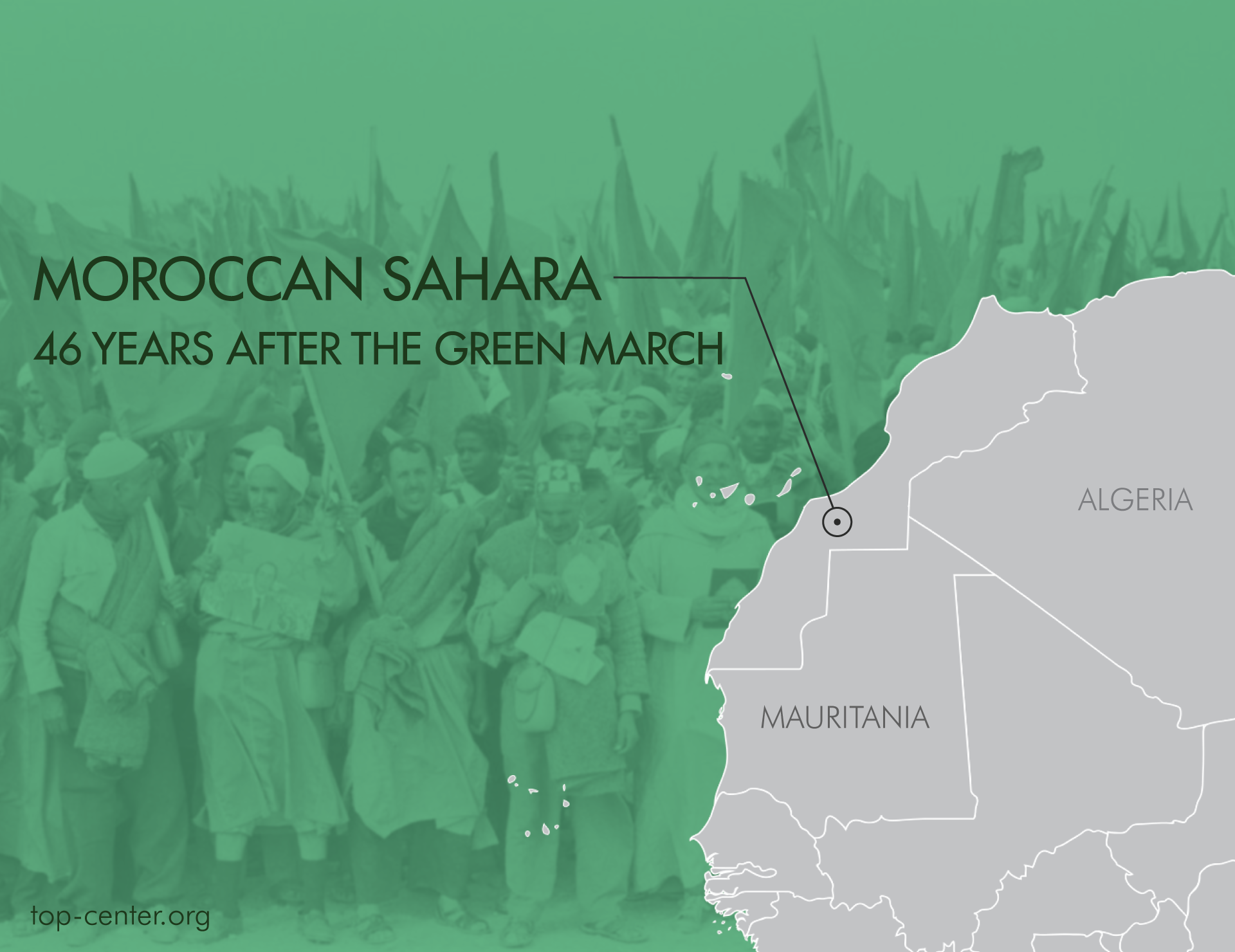 This year on 6 November the Moroccans celebrated the 46th anniversary of the Green March, a national holiday and a historic episode that changed the destiny of a vast region. It was on the same day of 1975 when nearly 350,000 unarmed Moroccans marched under the leadership of the late King Hassan II into what was then known as the Spanish Sahara. In this peaceful protest, the marchers, brandishing only Moroccan flags, green banners, copies of the Quran and the monarch`s portraits, expressed their opposition to the Spanish colonization of the region and affirmed nationwide intent to integrate it into Morocco.

Eventually, Rabat gained control over most of the former Spanish colony, which is now branded as the Moroccan Sahara.

While the rally takes its name from the color of Islam (as a reference to green banners and copies of the Quran), the Green March, a watershed event, has definitely imprinted a long-lasting impact on contemporary Morocco and now symbolizes Morocco’s unrelenting commitment to have sovereignty over the Sahara.

The Green March celebrations took place amid the (re-)boiling tensions between Morocco on the one side and neighboring Algeria. The latter does not want to recognize Rabat`s sovereignty over the Moroccan Sahara and has long backed the Polisario Front, a separatist movement, which demands independence for the region.

In October and November 2020, a group of Polisario separatists blocked the Guergarat passage point at the border between Morocco and Mauritania. The Moroccan forces moved to expel the Polisario militia and restore the normal circulation at the Guergarat point. The international support received by Morocco angered the separatists who announced the end of the ceasefire and the resumption of attacks that are easily suppressed by the Moroccan side with the recently acquired Turkish and Israeli drones.

The uneasy relations reached the lowest point this year with Algeria`s military maneuvers both in January and again more recently, both near the Moroccan border. In order to send more threatening signals against Rabat, the Algerian side also joined military drills of special forces together with Russia in Russian-supported South Ossetia, a secessionist entity in the post-Soviet space.

After months of high tensions between Algeria and Morocco, Algiers announced on 24 August the breakup of diplomatic relations with Rabat. The Algerians accused the Moroccan side of hostile actions, such as the series of wildfires that swept the Kabylia region, despite the fact that Rabat immediately extended its hand of aid for overcoming the disaster and offered two firefighting Canadair aircraft, which Algeria having no firefighting fleet of its own dismissed. Another reason to fuel the enmity could be the restoration of relations between Morocco and Israel, a move that extremely angered Algeria.

In late July the Moroccan King Mohammed VI offered reconciliation to the eastern neighbor, called to reopen the land borders and expressed his wish to meet the Algerian President Abdelmadjid Tebboune as soon as possible. According to the King, “Morocco and Algeria are more than just two neighboring countries: they are twins, complementing one another.”

The addressee, President Tebboune of Algeria, however, rejected any normalization and produced harsh and bellicose rhetoric, by announcing in mid-October his country`s readiness for war.

The current developments in Moroccan Sahara

In recent years, Rabat has gained visible achievements, political, diplomatic and economic, regarding the Moroccan Sahara.

The U.S. recognition of Morocco`s sovereignty over the region in December 2020 could probably be considered the biggest of these achievements (and perhaps the biggest blow to Algerian efforts to keep Morocco isolated on this issue). Moreover, some 26 countries have opened diplomatic missions in the Saharan cities of Laayoune and Dakhla, a move viewed as a recognition of Moroccan sovereignty. Washington also pledged to open a consulate in the Sahara.

The topical report of UN Secretary-General Antonio Guterres to the UN General Assembly in October 2021 has also been celebrated by the Moroccan side as a big diplomatic success. In this report, Guterres underscores that the issue of the Moroccan Sahara is considered by the UN as a matter of peace and security. Furthermore, the fact that Polisario`s armed elements blocked the road to passage of Guergarat between the borders of Morocco and Mauritania in October-November 2020 was also mentioned by the top UN official. The road situation was then resolved by Rabat`s decisive actions, which restored the free movement without any casualties.

During the recent municipal, regional and legislative elections held on 8 September 2021, the three regions of the Moroccan Sahara registered a record participation rate exceeding all other provinces. The participation rates of 66.94% in Laayoune-Sakia El Hamra, 63.76% in Guelmim-Oued Noun and 58.30% in Dakhla-Oued Eddahab, greatly exceed the rate of 50.18% recorded at the national level during this triple ballot. The active involvement of the regional voters during the elections, thus, confirms the Moroccan character of the Sahara and the total integration of the Sahara into the fabric of the regions of Morocco.

In his most recent address to the nation, on 6 November 2021, on the occasion of the 46th anniversary of the Green March, King Mohammed VI once again confirmed the “Moroccanness of the Sahara” as “an immutable and indisputable fact be it on account of history, legitimacy, the strong will of the Moroccan people or broad recognition by the international community”.

The monarch referred to the decision of the United States on recognizing Morocco's full sovereignty over its Sahara and the opening of consulates in the cities of Laayoune and Dakhla by more than 20 countries, particularly from the Arab world and Africa, which confirms broad and growing international support for Morocco’s position.

According to him, Morocco is adherent to reaching a peaceful solution to “this artificial regional dispute”, but it is never going to negotiate sovereignty over its Sahara and is ready to protect the country`s territorial integrity.

The Saharan province holds the potential to become a strategic link from Morocco to sub-Saharan Africa. The region has become an economic priority for Rabat, which has unveiled a grand plan with objectives for the economic development of "the great Moroccan South".

In 2015, the royal government announced the largest investment program in the history of the Sahara. The ambitious development plan comprises a hundred projects in the southern provinces for the period 2015-2021 which has designed to turn this territory into a hub of investment, tourism and logistics.

The kingdom has allocated some 6,600 million euros for the construction of the new highway between the cities of Tiznit and Dakhla, universities, renewable energy parks, airports, desalination plants, hospitals and the mega-project of the Atlantic port of Dakhla, co-financed by the United States. With this infrastructure, Morocco is multiplying its efforts to speed up the socio-economic development of the southern provinces. Much attention is attached to renewable energy as the city of Tarfaya now hosts the largest wind energy production park in Africa, which amounts to 300 MW, the goal is to provide electricity to 1.5 million households.

After decades of turbulence, the Moroccan Sahara is finally entering the stage of investments, economic growth and prosperity. A lot of efforts and funding are being poured into the region, which indeed possesses sufficient potential to become a hub of tourism and logistics. The most important element in this constellation is political stability, which the Moroccan King has already established. The international community, in its turn, can and should support the Moroccan efforts for the stabilization of this important region in the Maghreb.