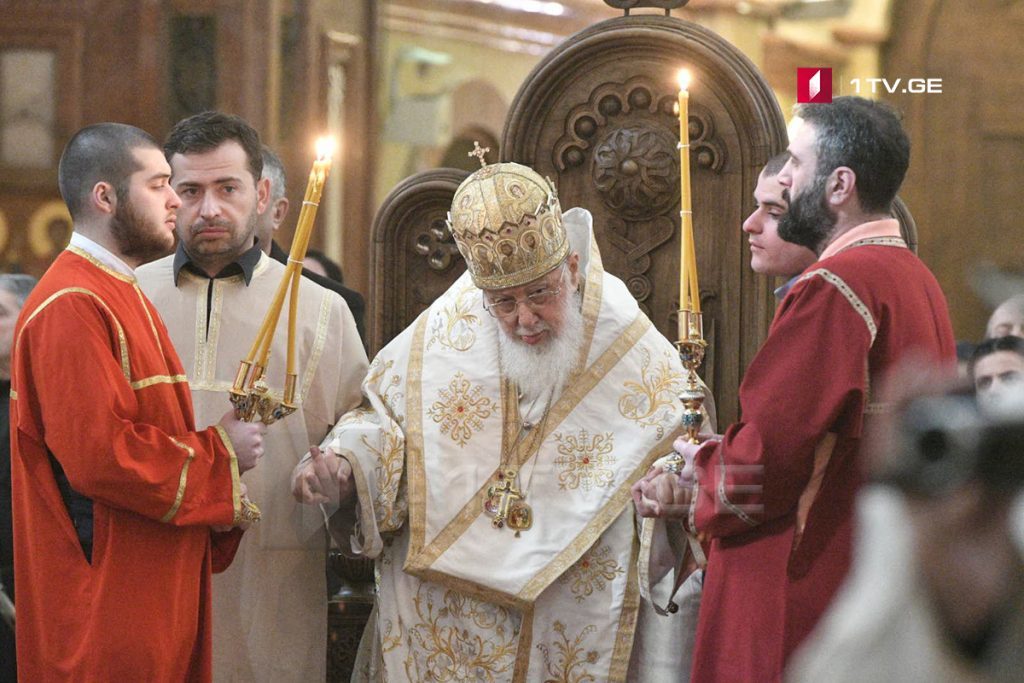 The most remarkable event in Georgia under a state of emergency that overshadowed all other news and developments was the Church vs State clash. Despite the nationwide state of emergency (declared on March 21), curfew, restrictive measures, ban on gatherings and promotion of social distancing, the Georgian Orthodox Church (GOC) seemed to ignore what was happening around and continued to live in its own oasis, practicing mass rituals, sometimes neglecting sanitary measures. The entire nation witnessed a war of rhetoric between the Church and State, which culminated on the eve of the paschal celebration: therefore, this year`s Easter in Georgia was quite intriguing as was the countdown to it.

The Church and pre-Easter quarantine

The early concern on the Church`s position was raised in March when Georgia was gradually adjusting to a quarantine mode to fight the COVID-19: unhygienic practices, such as cross- and icon kissing, communion spoon-sharing stubbornly continued by the clergy amid the rapid spread of the coronavirus were met with criticism. The only institution that could challenge the Church in this situation was or should be the state, which nevertheless lost battles in several episodes. Despite the urgings of health authorities, the clergy never switched to disposable items.

With Easter approaching, quarantine rules were made even stricter (also in order to prevent crowded paschal celebrations at churches): driving of private cars was prohibited, and movement in and out of the four largest cities of Georgia became restricted. But on the eve of the Christian holiday, another battle of the conflict was resolutely won by the Church: the latter claiming that the ban had not been agreed with the Georgian Patriarchate beforehand, obtained a privilege for the clergy to use automobiles.

Things got even tenser prior to the Orthodox Pascha celebrations to be held on April 19. While most organizations had already closed or switched to remote mode, the Church refused to call on believers to celebrate Easter at home. Even the COVID-19 infection cases among the clergy and auxiliary staff did not soften the position of the religious authorities.

The government, which was supposed to stand firm in its policies found itself unable to enforce emergency rules on the Church. Moreover, the government seemed to be divided when making contradictory statements: Prime Minister Giorgi Gakharia initially stated that the ban applied to “everyone and everything”, while Speaker of the Parliament Archil Talakvadze noted that the ban would not restrict religious freedoms, as participating in religious rites was the inalienable right of the faithful. The Patriarchate, in the meantime, announced that banning attendance at Church services was ‘unpardonable’ and ‘a crime before God.’

The defensive position of the government would usually produce rhetoric that addressed directly and put the responsibility on (pious) citizens, not the Church: President Salome Zourabichvili let know that she herself would not attend Easter services to be an exemplary citizen and not violate government restrictions, including the curfew. A cornered Prime Minister Gakharia, who eventually had to bow before the religious authorities by announcing that churches across the country would remain open, expressed his hope that the public would act responsibly and not go to church but that government would not tell them not to do so.

The controversy over the paschal liturgy ended after long consultations on April 15. According to the joint decision of the Georgian Government and the Patriarchate, churches would be operating on Easter night throughout the country. The service was to be conducted in compliance with the relevant ant-virus recommendations: Only clergymen would be allowed in small churches, while a 2-meter social distance maintained in large temples. All safety standards set by the Ministry of Health would be observed in the churches. Churches would not be closed but countrywide curfew would remain effective, with police patrolling around them. The clergymen would have to come to churches before 9 pm and leave them only after 6 am to observe the curfew. The only compromise by the Church, a small win for the government, was the ban on visiting cemeteries, an integral part of the Easter celebrations.

While several high-ranking officials, including Health Minister, welcomed the consensus, the top epidemiologists, alerted loudly against the backdrop of the government`s weak position, begging the population not to make a fatal mistake by attending the religious ceremony.

While the paschal vigil between Saturday and Sunday took place in many churches across the country, the event in Georgia`s main Holy Trinity Cathedral was hosted by the 87-year-old Patriarch Ilia II himself, who clarified the Church`s position again by saying that “life and death are in God’s hands.”

Although the clergy had promised to enforce precautionary measures, it was not the case in many temples: while crowds made ritual processions around churches without keeping distance or wearing masks in Kutaisi, Georgia`s second-largest city, the service at the Holy Trinity Cathedral broadcast live on television the violation of the government’s social-distancing orders.

The attitude of the Patriarchate stirred fury among the secular segment of the society, as well as moderate believers. Two theologians especially reacted harshly: Beka Mindiashvili named the Georgian Church`s actions ‘bioterrorism’, Basil Kobakhidze ‘a massacre of people by the priests’.

The influence of the Georgian Orthodox Church

The Georgian Orthodox Church emerged as the most influential institution of the country amid the post-Soviet chaos and uncertainty marked by civil war, secessionist movements, unemployment, poverty. In the aftermath of a forceful comeback under Patriarch Ilia II, a highly respected figure among the local population, the GOC has only grown its power over the past three decades and developed into a highly politicized institution by interfering in every sphere of life. That Georgian Orthodoxy is accepted as a fundamental part of the national identity keeps the Church a very powerful organization: even the Constitution which defines the separation of religion from the state, still emphasizes the special role of the Georgian Orthodox Church in the country's history.

For many consecutive years, it is the Georgian Church that has been named as the most influential institution in the country, although this reputation has significantly lowered recently: the approval rating went do from 95% in 2013 to 64% in 2019  and to further 50% in 2020. According to Ghia Nodia, a prominent political analyst, the state in Georgia has already shared part of sovereignty with the Orthodox Church, which acts as a co-ruler of the country. Both the Church and its leader Ilia II are so powerful that it is sometimes speculated that Georgia is a bit short of theocracy.

Given this power and reputation of the Patriarchate, Georgian politicians, usually those in power, usually strive to earn its favor: under Shevardnadze, the GOC received a special status under the 2002 concordat, under Saakashvili the clergy possessed expensive vehicles and luxurious mansions, and Ivanishvili provided them with more subsidies and privileges.

Parallel to attempts to secure the support of religious authorities, every leader was also interested to weaken the influence of the Church. The latest war of pandemic rhetoric is not the first conflict of this kind; but the degree of involvement of the citizens this time was much higher, the reactions harsher. This confrontation between the spiritual and secular authorities was likened by one expert to two racing cars speeding up face-to-face, expecting the other side to fear and move aside. Obviously, this time, again, it was the state that decided not to continue the suicidal race and not to bump into the Church.

Yet, the rationale behind the double standards of the governing Georgian Dream is understandable: the party does not want to ruin its complex relations with the GOC before the parliamentary elections scheduled for October 2020. The support of the Church will again be vitally important for the ruling elite. A further aggravation could certainly lead to the loss of the votes of the conservatives and believers.

While Orthodox Church is seen as an integral part of national identity, the Patriarchate, due to its reluctance to cancel the services and recognize the state of emergency drove controversy and is facing the most vocal public criticism in three decades of Georgia’s independence.

The state`s inability vis-à-vis the GOC has also left many in the citizenry in confusion, anger, and despair. Therefore, the state institutions also received a good deal of criticism for their mild and defensive position in this vital period, when strong statehood and societal solidarity were needed.

Indeed, the policy of appeasement of the State against the Church, which emboldened the latter and resulted in the capitulation of the former, ought to raise a concern about the state institution’s ability, full authority within the country, as well as the government`s competence and real priorities during the pandemic. The latest developments could definitely undermine the idea of a secular statehood and harm the liberal-democratic orientation of Georgia.