Tucker Carlson and anti-immigration after Trump 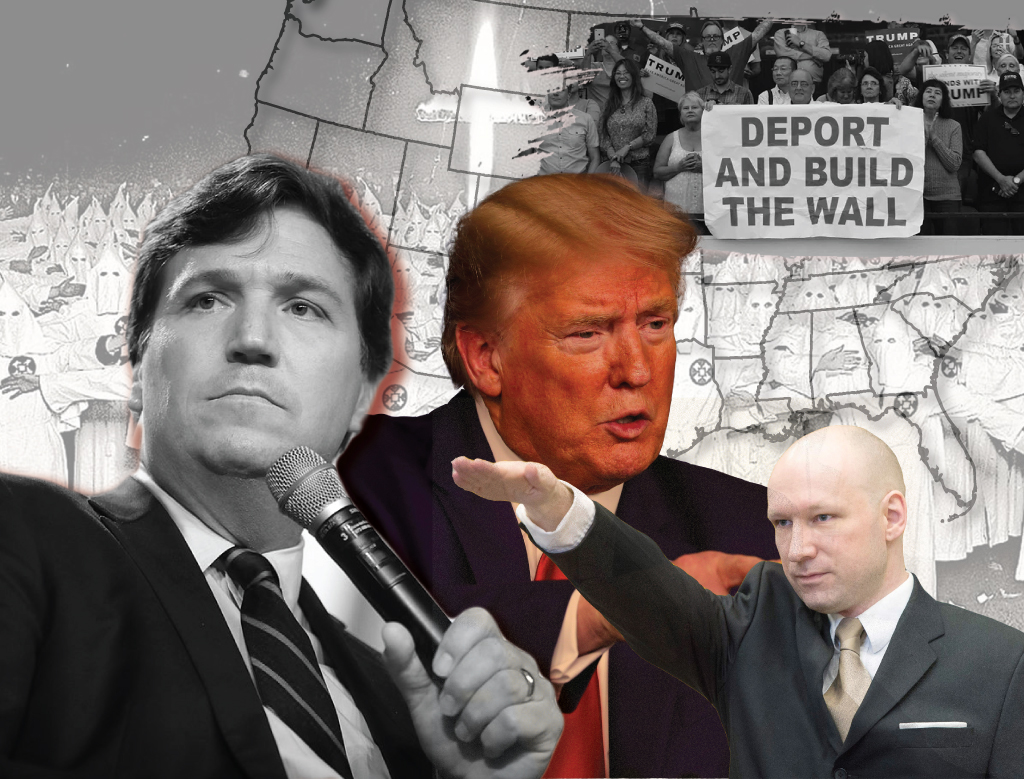 The issue of immigration was one of the defining features of the Trump presidency, so much so that the Trump administration issued more than 400 executive actions in an attempt to restrict immigration in one way or another. While contrary to the popular perception, the real impact of Trump on immigration rate has been rather limited, it is also undeniable that Trump’s opposition to large-scale immigration was a prime contributor to his political success. As the ultimate anti-Trump, President Joe Biden has sought to resurrect the idea of America as a “nation of immigrants”. But as Aristide Zolberg pointed out in his book A Nation by Design, America is “a nation of immigrants, to be sure, but not just any immigrants”.

If we take a closer look at the history of nativism in the U.S., we will see that the question of “who deserved to be an American?” was a salient element of the mainstream debate in the American society even before political independence. Between 1845 and 1854, the U.S. experienced an unprecedented influx of migrants, many of whom were of Catholic origin. This phenomenon created a powerful backlash in society, which manifested itself in the establishment of the first big third party in the history of the American political system, the Know Nothing Party.

At the height of its power in the 1850s, the party had more than 100 congresspeople, 8 governors, and thousands of local officials listed as its members. The Know Nothing party embraced xenophobic nationalism and appealed to the hatred aimed at Catholics immigrants who, according to them, were a threat to the order established by the Founding Fathers. Even though the Know Nothing party collapsed by the late 1850s since the issue of slavery proved to be more urgent than immigration and demanded more immediate action, nativist concerns never faded away completely and were a recurrent strain in the American psyche aimed at each new tide of immigrants.

Unprecedented industrial growth in the U.S. during the early twentieth century required huge supplies of labor, which, in turn, caused the massive influx of immigrants into the country. This great wave of immigrants stimulated a new nativist backlash, when many Americans came to blame the problems caused by rapid modernization on the immigrants from southern and eastern Europe. According to the them, immigrants from south eastern Europe were “biologically and culturally less intelligent, more criminal, less manly, less courageous, less ﬁt (if ﬁt at all) for self-government, and, thus, were a serious menace to the American nation”. Public anxieties over the perceived threat to “traditional American values” from immigration peaked after the First World War and subsequently led to the revival of the Ku Klux Klan.

On November 25, 1915, William Joseph Simmons burnt a cross at the top of Stone Mountain in Georgia, signaling the resurrection of the Ku Klux Klan. Like many similar nativist far-right organizations, the Ku Klux Klan responded to the anxieties brought about by large-scale immigration during the first wave of globalization. According to its supporters, the KKK stood for immigration restriction and was against the groups who were not “pure” American, mainly Catholics, Jews, and African-Americans. The Klan admitted only native-born white Anglo-Saxon Protestants and drew its support from the working-class members of that group. At its height the Klan had between three and eight million members. It controlled the legislatures in Indiana, Oklahoma, Oregon and Texas, and was key to the election of several governors and many local officials. However, after the U.S. Congress enacted restrictions on immigration in the 1920s, immigration numbers dropped and therefore the political circumstances that attracted people to the Ku Klux Klan changed. This made the Klan increasingly irrelevant, and by the end of the 1920s the KKK completely collapsed as a social movement.

Even in the 1960s, to broaden congressional support to the Immigration Act of 1965 that did away with discriminatory national origins quota policy and established a new immigration policy based on family reunification, Lyndon B. Johnson, Robert F. Kennedy and others had to sell the bill to the naysayers by assuring them that the bill was not revolutionary and that it would only help to maintain white demographic dominance by increasing immigration from Europe. In reality, however, the bill was indeed revolutionary since it did diversify the racial and ethnic fabric of the American society.

One of the core features of far-right populism is conspiracy beliefs. In his essay, The Paranoid Style in American Politics, first published in Harper’s Magazine in November 1964, the great American historian Richard J. Hofstadter described the existence of a distinct frame of mind in politics that does not just see “conspiracies or plots here and there in history, but that they regard a ‘vast’ or ‘gigantic’ conspiracy as the motive force in historical events”. For this frame of mind, history in itself “is a conspiracy, set in motion by demonic forces of almost transcendent power”. Those who hold these beliefs, as Hofstadter put it, “imagine dark forces and hidden plots and are convinced of the existence of a vast and sinister conspiracy, a gigantic and yet subtle machinery of influence set in motion to undermine and destroy a way of life.” Such bipolar thinking is reflected in a so-called “belief in simple political solutions” — belief that, with the right policies, societal problems can be solved rather easily.

Although today the context is different, the themes are still the same. Unfortunately, being deceptive about immigration, even if it is for the greater good, has also helped to fuel people’s worst fears: that a conspiracy exists to favor the interests of one group over those of the native population— a grand plot to “replace” natives with migrants. Just recently, famous Fox News host Tucker Carlson argued that the Democratic Party was “trying to replace the current electorate” in the U.S. with “new people, more obedient voters from the Third World.”

What Carlson is doing is not new. It is the old strategy of “racism-without-racism”, which is appealing to voters’ anxieties about cultural transformations without advancing openly racist arguments that had been associated with the Nazi ideology and thus shunned by the majority of voters. This strategy, first used by Jean-Marie Le Pen, is very effective. In 1972, he established the Front National (FN), which argued that common people were being exploited by corrupt cosmopolitan elites. It downplayed its neo-Nazi legacy and spoke of the need to preserve cultural identity and protect a national “way of life” (le mode de vie français) from immigrants. In 1984, using a new strategy of identity politics—attacking nonwhite immigration without openly making arguments for white Christian supremacy—the FN achieved an electoral breakthrough, winning about 11 percent of the vote in the European Parliament elections.

Ideas espoused by Donald Trump, Tucker Carlson and similar populists emphasize faith in wisdom and virtues of “common people” over the “corrupt” and “dishonest” establishment. By referring to “common people,” they advance the ideas of nativism, which claims that ordinary people are homogeneous and inherently “good,” in stark contrast to dishonest elites. Populism ultimately at its core is nothing more than an “us-versus-them” mentality, one that merely sets up a basic structure of a society divided into two monolithic and antagonistic groups: that of a “pure” people against a “corrupt” elite. In this context, the establishment is perceived as a monolithic entity concerned only with its own well-being, while the people is perceived as a homogenous community with the general will (volonté générale) concerned with ensuring the common good.

In Carlson’s narrative,  who could very well be the next Trump and the future of the Republican party, national identity is seen to be under threat from the establishment that enabled massive immigration from foreign cultures. Carlson rationalizes his hostility towards immigration with their notion of a homogeneous cultural identity that globalization and neoliberal capitalism tries to destroy by intentionally provoking migration. Far-right populists see the national political and economic elites as the true culprits of mass immigration. They approach the issue of mass immigration as a conspiracy of the left-wing parties, trade unions, and big business in which the first two want to increase their support base, and the latter their pool of cheap labor. Consider the case of the Norwegian far-right terrorist Breivik, whose main concern was the demise of European culture as a result of the “demographic warfare” launched by Muslim immigrants. However, he took his “vengeance” not on immigrants themselves, but on those whom he perceived to be “leftist appeasers” and “traitors”, who actually carried out the “great replacement”, killing eight people by detonating a bomb outside a government building in Oslo and then killing sixty-nine more people, mostly teenagers, at a summer camp connected with the Norwegian Labor Party.

By mixing nativism and anti-immigration attitudes with protectionist economic policies, Trump managed to come up with a political message that resonated with voters’ key anxieties. The fact that Trump lost does not mean that it was an aberrant phenomenon and that those anxieties have magically disappeared. Those beliefs and sentiments still exist within mainstream society and the debate around immigration is still deciding the future of the U.S.