Russia's Taliban overtures: how to contextualize them? 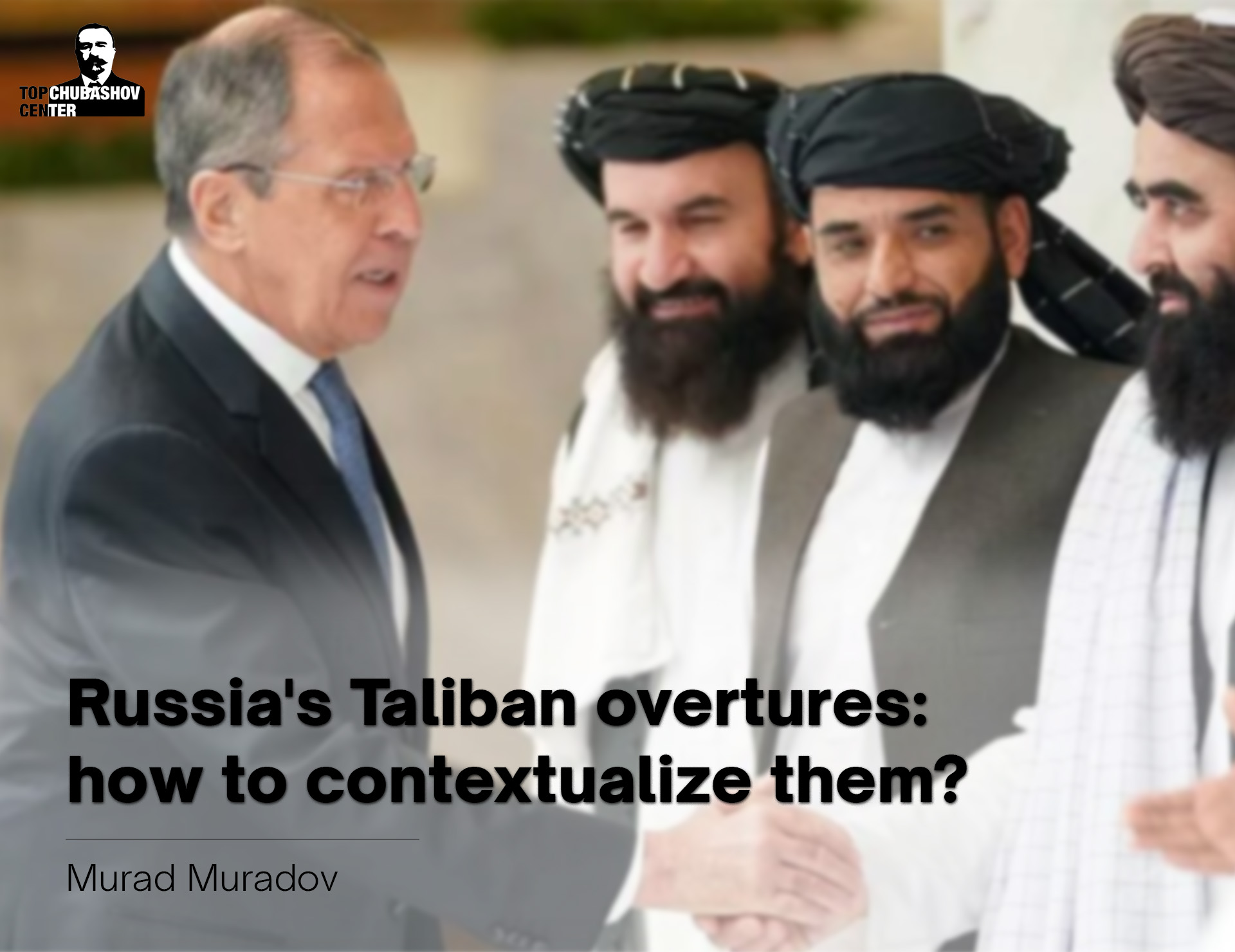 The lightning-speed collapse of the Ghani government at the hands of the Taliban movement following the withdrawal of American troops caused most diplomatic representations and international organisations stationed in Kabul, to evacuate. Among the few countries which have not done the same and decided to retain their embassies, such as China, Pakistan or Iran, Russia Is an odd one out. Indeed, how come the country where Taliban is officially banned as a terrorist organization (you may get heavily fined if you even mention their name in the media and public sphere in general without stating this fact) pretend that everything is going fine? Russian Ambassador in Kabul even said that the situation in the city after its takeover by Taliban became better than it had been under Ghani and that the Embassy is guarded by the movement’s special forces.

There are several reasons to be, softly speaking, surprised at Moscow’s newly founded tolerance for the Talibs. Since the Afghan war, literally everything related to this country is widely perceived in Russia as inherently dangerous and unfriendly, let alone hardline Islamists known since their first tenure mainly for medieval atrocities. By the way, Russian society in general is prone to widespread Islamophobia, and the so-called “Chechen syndrome” ensures that anything perceived as slightly “Islamist” is feared and resented. In fact, this treat is one of the few beliefs largely shared by so-called “patriots” and “liberals”: the former hate Islamists as Russia’s “sworn enemies” raised by the West and feel nostalgic when Russia fulfilled “the white man’s burden” towards the Muslim peoples of Caucasus and Central Asia; the latter are strictly opposed to all forms of “religious fundamentalism” as anti-Western and hence, barbaric.

More specifically, Taliban has always been perceived as a particular kind of evil in Russia for its connections with the jihadis in Chechnya in 1996-2001 (quite a lot of the would-be fighters were trained at the Afghan camps, while al Qaida also recruited fighters for North Caucasus from Afghanistan in the period when bin Laden received shelter from the Taliban leader Mullah Omar). At the same time, one of the most entrenched geopolitical fears among the Russian political elite and expert community is the radicalization of Central Asia and subsequent revolutions and civil wars- Taliban has been considered the likely culprit for such a doomsday scenario as Afghanistan shares a border with three Central Asian states and has extensive ethnic and cultural ties with them.

However, things have been slowly changing. The representatives of Taliban paid visits to Moscow in 2018 and 2019 and the latest one- in 2021, which is quite ironic given that the ban on the movement is still in force in Russia. These visits of course happened within the framework of a lengthy negotiation process centered around the Talibs’ international office in Doha which has served to bring them from the absolute margins of the global politics into the limbo of de-facto recognition, and contacts with U.S. and the West in general had been launched before Moscow decided to step in. But still, such an overt volte-face and ostentatious gestures of friendship on behalf of Russia, where many politicians and experts may even dub Turkish or Azerbaijani governments as “Islamist”, still raises a lot of questions.

First of all, a certain change in Russian politics towards the Middle East and Muslim countries, in general, is undoubtedly going on. Learning tough lessons from its intervention in Syria where it fell hostage to its close relationship with Bashar Assad that alienated huge swaths of the local population and a number of Muslim countries, Moscow now tries to behave more pragmatically and diversify its geopolitical portfolio. We have witnessed this new trend in Lybia where Russia tacitly withdrew support for Marshal Haftar in order not to spoil its relationship with Turkey and important Arab states. At the same time, such countries as China and Turkey which are politically very important for Moscow seem to uphold the view that Taliban at this stage should be given a chance, so for Russia, given that the “legitimate” Afghan government remained without any international support, it would be illogical to bet on a dead horse.

Taking a bigger picture, it makes sense for most big players now to take their time and try to establish a working relationship with the new regime. The reason is uncertainty: Taliban has risen from the underground into the corridors of Afghan power too quickly, defying any highbrow forecasts of military experts and Western leaders (most notably President Biden himself), so literally nobody know can be sure about how the Taliban 2.0 will behave, whether their promises can be at least partially trusted and what geopolitical choices they are going to make. It is not only Russia and China that sound accommodating- recently, the British officials have stated that Talibs may become a legitimate government if they respect the conditions and promises upon which the Western troops were withdrawn, including “respect for basic human rights”. Under uncertainty, the best strategy is not to make radical moves which could alienate the potential partner and kick you out of the game, but rather wait and try to gain more foothold.

Gaining a foothold in the future Afghanistan is important not only for geopolitical and security reasons, but also due to the massive natural resource potential of the country that have remained almost untapped for decades (the total worth is estimated, according to some sources, at $4 trillion). Russia in recent years has viewed mining sector in the developing countries as one of the best opportunities for economic expansion with a view on geopolitical benefits- which can be witnessed from the example of Russian policies in Africa. All major players also know very well, and Russia is no exception, that Taliban will need assistance in virtually every sphere in order to consolidates its power and compensate for the giant holes in the budget imminent now as direct international aid is expected to shrink.

At the same time, on the Central Asian issue which has been already mentioned before, Moscow is likely to somewhat depend on the Taliban’s benevolence. The Kremlin seems to be ready to cut a deal with the “students” akin to that brokered by the Chinese who pledged to recognize the new government and assist them in exchange of the latter’s promise to give a green light to Chinese investment, not to support the Uyghur rebels or shelter them in Afghanistan. A lot of Russian experts have voiced concerns that U.S. would like to use Taliban to trigger instability in the Central Asian republics in order to further weaken Russia and involve it in new conflicts, so they believe that this scenario should be avoided at all costs. And although it is no secret that the Taliban do not share messianic plans for a global jihad, there are other forces present in Afghanistan who do- primarily ISIS, and the horrible terror acts on 26 August were a painful reminder. For the “Islamic State”, Central Asia can become a lucrative recruitment source and a chance for expansion. So, the Talibs who have been waging a war with the unwelcome newcomers, look as a much lesser evil now- and keeping the terrorists at bay with their help is much more acceptable for Moscow than to deploy its own forces and capacities, risking a wave of terror acts in Russia itself.

Finally, the Russian government has certain domestic reasons to behave as it does. Parliamentary elections in Russia will be held very soon and the ruling United Russia party cannot feel fully secure given the steady decline in its popularity which has already translated into worsening electoral outcomes. Moscow definitely wanted to exclude any risks of attacks against its Embassy in Kabul or any other unfriendly activity which would have cast doubt onto the foreign policy competence of the Russian government, the only sphere where it enjoys the unequivocal support of the majority of Russians. At the same time, ensuring safety and continuous work of the Embassy has also provided a positive contrast with the hasty withdrawal and evacuation undertaken by Western countries and gained an additional opportunity for the state propagandists to tease U.S. and claim the failure of their global dominance ambitions while at the same time extolling the geopolitical wisdom and mastery of President Putin and Russian MFA.