It's wrong to blacken the "Green corridor": what is really happening along the Lachin road 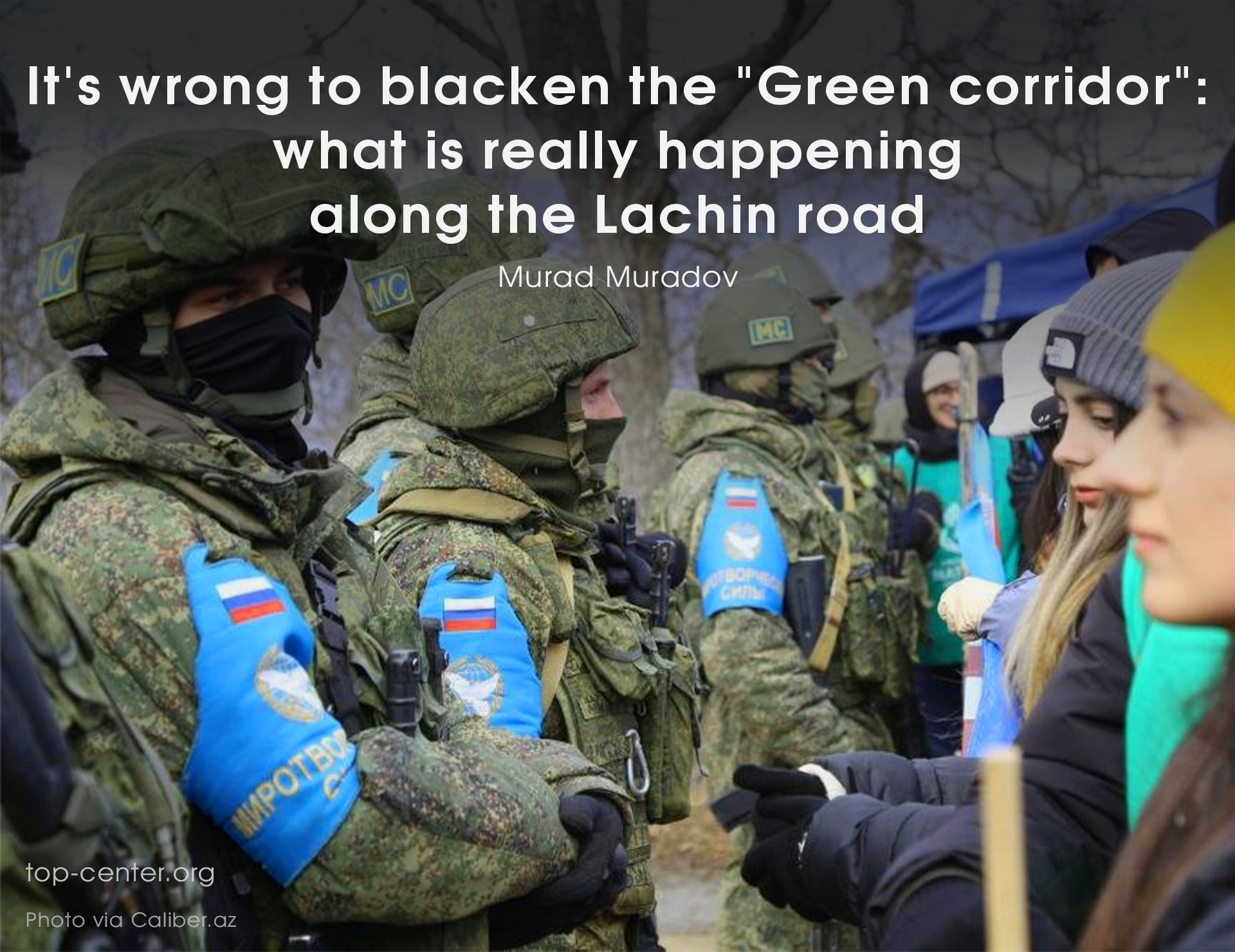 On December 12, a group of Azerbaijani environmental activists together with the representatives of other NGOs started a peaceful protest along the Shusha-Lachin road which connects Armenia with the Armenian-populated part of Karabakh now controlled by the Russian peacekeepers. The protesters denounce the illegal exploitation of the Qizilbulaq (Drmbon) and Demirli (Kashen) gold and copper mines situated within this territory and demand access to environmental inspectors. Those mines have long constituted one of the major income sources for the separatist entity and metals produced there were among very few “exports” it had. A week earlier, Baku demanded to have their operations checked in order to guarantee environmental security and proper taxation, however, the de-facto “authorities” refused. On December 11, Azerbaijan sent a diplomatic note to Russia concerning the "illegal exploitation" of natural resources in the liberated Karabakh region.

As the Russian forces blocked the road to prevent the protesters from going towards Khankendi, their ranks started to swell, as hundreds of people joined the vigil. Tents were opened, while the Azerbaijani authorities helped with electricity and heating. The Armenians of Karabakh, along with the Armenian and pro-Armenian organizations around the world, almost immediately started to accuse Baku of conducting “a genocidal policy” and claimed Azerbaijan had closed off gas supplies (which are actually provided by Armenia), which has been already refuted by SOCAR. Unfortunately, a number of media and experts around the world have also stuck to this distorted and biased version of the events, representing them as the Azerbaijani government’s attempts to create a humanitarian catastrophe in Karabakh to force Armenians to leave.

Several points should be made clear to fully grasp the context of the process. First of all, the trilateral agreement of 09.11.2020 which regulates the ceasefire regime and Russian presence in Karabakh, does not have any provision restricting the entry of unarmed Azerbaijani civilians into the territory. Rather, as it normally the case with peacekeeping forces, their mission is to check the entrants and provide them with security guarantees. However, 2 years after the end of the 44-day war, Azerbaijanis are still virtually unable to go to Khankendi and other Armenian-populated areas. While in the first months after the ceasefire Baku didn’t much insist on this understanding that contacts should be repaired very carefully and gradually, now, when the peace talks between Azerbaijan and Armenia are at an advanced stage, enforcing almost total isolation between the communities doesn’t make any sense. In fact, this isolation works in both directions: last year, Russians prohibited an Armenian woman from Karabakh who wanted to move to Azerbaijani-controlled Shusha, from entering. We don’t even discuss here the fact that point 7 of the 9 November agreement which stipulates that “internally displaced persons and refugees shall return to the territory of Nagorno-Karabakh and adjacent areas under the supervision of the UN High Commissioner for Refugees”, remains as far from its implementation as it used to be 2 years ago. Moreover, while the Azerbaijani side is largely accused of closing the road to Armenian civilians, protesters have already refuted this claim, confirming that civic cars can freely pass through the Lachin road and any assistance needed for healthcare and humanitarian purposes will be provided. In fact, it is the Russian forces who have been closing the road with their trucks, as the photos show and many people in Armenia, including the leader of the European Party Tigran Khzmalyan, not particularly known for his sympathies towards Turkey and Azerbaijan, confirm. Hikmet Hajiyev, the Foreign policy advisor to President Aliyev, also confirmed that the road is blocked by the Russian side.

The Russian peacekeepers’ behavior has already demonstrated they are least interested in facilitating the contacts and normalization between the parties- and given that the Russian side has recently started to speculate about the extension of the mission for up to 15-20 years, it clearly makes sense for them to make the peace between Azerbaijan and Armenia seem unattainable. Moreover, the enigmatic appointment of Ruben Vardanyan, a Russian oligarch of Armenian origin, to the position of “State minister of Artsakh” at the moment when the peace negotiations seemed to have gained real momentum, raises additional questions. Vardanyan claimed that the people of “Artsakh” and Azerbaijan should live “next to each other but separately”, indicating his support for the void and hopeless claim of independence. Moreover, this claim reverberated with the infamous words of former Armenian president Kocharyan who once named Azerbaijanis and Armenians “ethnically incompatible”. Many experts believe that Vardanyan’s mission consists of using his vast resources to raise the living standards of Karabakh Armenians and make them believe they can really live independently.

Those policymakers and experts who castigate Azerbaijan, tend to forget that throughout these two years Baku has demonstrated quite a lot of goodwill by refusing to rush with the full reintegration process even in the face of frequent provocations, including the supply of significant amounts of arms and such events as the arrival of a group of armed Iranian militaries with the purpose of training so-called ‘Artsakh self-defense forces”- all through the Lachin road from Armenia. When it comes to supplies of gas and other amenities, they have always been coming from Armenia, and Baku has never taken any responsibility for ensuring their uninterrupted provision- which would have been a strange thing to do given that the “Artsakh authorities” consistently refuse contacts even on the basic level. Indeed, until there is no agreement to cooperate on such matters as the environment, use of resources and general economic activity, it is hard to demand political reconciliation from Baku.

In light of all this, such comments as one made by Tom de Waal who compared the Azerbaijani protesters with the Russian “little green men” deployed in March 2014 in Crimea, are absolutely unacceptable. These “little men” were sent by the state with a clear-cut purpose of facilitating the occupation of another state’s territory without any tangible threat against Russia or the population of Crimea. People who have been gathering in the middle of winter in the freezing mountains of Karabakh, require the implementation of basic norms of international law and proper undertaking of the peacekeeping mission. In fact, the only real “big green man” in this story is Vardanyan- a man deployed from Moscow to spoil and subvert the proper reconciliation process and at the same time put an obstacle to the rise of the EU as the major mediator and peace dealer in the region. Instead of blackening the “Green corridor”, sincere proponents of the Azerbaijani-Armenian reconciliation should focus on how to turn it into a roadway toward sustainable and inclusive peace.