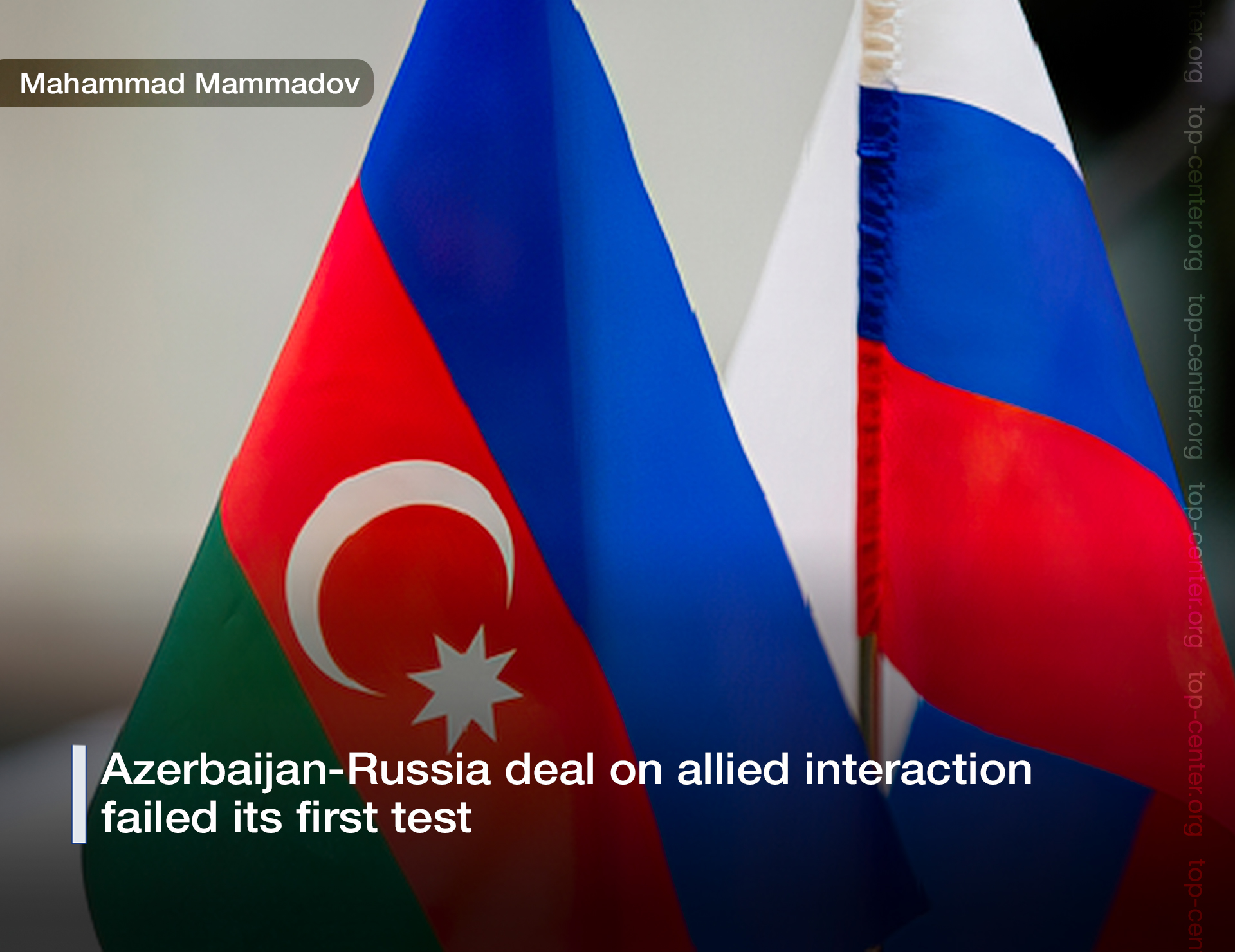 After Azerbaijan’s decisive victory in the Second Karabakh War in 2020, it was only a matter of time for Azerbaijani and Russian leaders to come together to revisit the basic principles of bilateral relations. Adapting the strategic ties to the new geopolitical realities on the ground was expectedly the main goal, especially in the context of the temporary deployment of Russian peacekeepers to the remaining parts of Karabakh and Azerbaijan’s alliance agreement with Turkey. At the Sochi meeting in November 2021, Russian President Vladimir Putin hailed the successful implementation of the strategic partnership with Azerbaijan and called for further deepening of bilateral relations. President Ilham Aliyev, in his New Year’s address to the nation in December, said relations with Russia would be officially raised to a higher level in the near future.

It was on February 22, two days before Russia’s all-out attack on Ukraine, Azerbaijan and Russia signed the declaration on allied interaction. What caught many observers off guard was the timing of the new agreement and the Azerbaijani side’s interest in upgrading ties with increasingly aggressive Russia to the level of an ally just a week after President Aliyev signed the Shusha Declaration on allied relations with Turkey into law. Since the Russia-Georgia war in 2008, Azerbaijan has been pursuing a non-aligned foreign policy by avoiding full commitment to regional integration projects offered mainly by Russia and the EU. However, signing agreements on allied relations with two neighboring major powers within a month showed the diplomatic strategy of keeping distance when faced with critical junctures on the regional level may now have run its course. The new foreign policy direction envisages building closer ties to all regional players so as to make them invested in the idea of peace and stability in Azerbaijan and the broader South Caucasus.

The February 22 declaration contains certain restrictive provisions regarding Baku’s independent foreign policy. As in December 17 treaty proposals to the United States and NATO, here too, Russia openly claims respect for her privileged interests by her interlocutor. Accordingly, Azerbaijan is expected to refrain from directly or indirectly challenging the Russian position in different markets. Or the Kremlin, highly irritated by Azerbaijan’s military cooperation with Turkey and Israel, wants Azerbaijan to buy more weapons from or hold joint operational and combat training activities with Russia. These claims surely limit Baku’s maneuvering space but Russia’s increasing isolation from the West since late February and Azerbaijan’s successful diversification of international linkages provide the latter with certain mechanisms to balance some of these pressures. The military alliance with Turkey, deepening strategic ties with the EU, Israel, Pakistan, etc., and a relatively strong economy are what differentiate Azerbaijan from the other small powers in the so-called shared neighbourhood, affording it a wider margin of error vis-à-vis the northern neighbour. In Article 2 of the declaration, Azerbaijan signals its aversion to compromises on its independent foreign policy aimed at protecting its national interests.

It might be a bit early to assess the effectiveness of the declaration after a month as it has not yet been ratified by the parliament unlike the Shusha Declaration with Turkey, but the speedy turn of events in Ukraine and relatedly in Karabakh showed that the Russia-Azerbaijan alliance have not survived the first test. From the first days of the war, Azerbaijan conducted a calculated balancing act designed to keep a number of options open at once, a policy strategy that could be characterized as more of continuity than change in Baku’s decade-long Russia policy. On the one hand, Azerbaijan sent humanitarian aid to Ukraine and provided much-needed energy supplies for different services in the country. Ukrainian President Volodymyr Zelensky and leading Western countries thanked Azerbaijani leadership for this support on many occasions. On the other hand, Azerbaijan did not join the sanctions on Russia and went a long way to avoid straining relations with Moscow. Even the Russian bombing of Azerbaijan’s honorary consulate in Kharkiv did not receive a harsh response from Baku.

However, relations went south when the Russian military official mentioned in a March 7 briefing an aid shipment sent by separatists in “Nagorno-Karabakh” to Ukraine. On the same day, Azerbaijan’s Ministry of Defense lashed out against the use of the name in the statement, claiming that “there is no administrative and territorial unit called ‘Nagorno-Karabakh’ in the territory of the Republic of Azerbaijan”. The ministry went even further to warn Russia that such statements may damage bilateral relations and lead to an aggravation of the situation in the Azerbaijani territories where the Russian peacekeepers have been temporarily deployed according to the November 10 agreement.

This is what happened on March 25 when the Azerbaijani military advanced toward the Farrukh peak near the town of Khojali which is under the control of Russian peacekeepers, responding to the Russians’ silence or even help to the separatist Armenian formations in Karabakh to dig trenches and military fortifications near Azerbaijani positions. It led to an unprecedented tug of war between the Russian and Azerbaijani defense ministries as Russia accused Azerbaijan of violating the November 10 agreement by entering the zone of responsibility of the Russian peacekeeping contingent in Karabakh while Azerbaijan reciprocated by claiming that separatist armed groups should be withdrawn from the territory under the temporary control of Russia according to the Article 4 of the agreement. Tensions came to a head on March 29 as Russia’s State Duma deputy Michael Delyagin characterized Azerbaijan as “Turkey’s proxy” in the South Caucasus and called for the punishment of Azerbaijan for its “aggressive actions” in Karabakh. Although Delyagin later apologized to Azerbaijanis, the Azerbaijani side responded by issuing an arrest warrant for the Russian MP and accused him of terrorism and open call for war. Taken together, the Azerbaijan-Russia rupture over Karabakh in March showed the ultimate breach of Article 25 of the February 22 declaration which called for the two sides to join efforts in countering and neutralizing the threats of extremism and separatism.

In this context, it should come as no surprise that Azerbaijan seeks alternative platforms to engage Armenia in a mutually beneficial reconciliation process. The 5-point peace proposal to Armenia declared by the Azerbaijani foreign ministry in March was part of this plan, aiming to talk to Armenia in a direct way. At the same time, Baku hopes the continuing normalization of Turkey-Armenia relations will have a constructive spill-over effect on expected peace talks with Yerevan. Most importantly, the EU’s emergence as an alternative mediator affords Azerbaijan many opportunities to decrease Russia’s leverage in the peacemaking process. The second trilateral meeting between the leaders of the EU, Armenia, and Azerbaijan on April 6 in Brussels was a significant step in this regard as the three sides not only reiterated their commitment to the realization of certain policy goals put forward in the December 14 meeting but also agreed on a roadmap for delimitation of borders and the preparation of a peace treaty.

Apparently, Brussels’ diplomatic success amid the ongoing war in Ukraine did not go unnoticed in Moscow. On April 7, Russian Foreign Minister Sergey Lavrov in a meeting with his Armenian counterpart criticized the EU’s lack of reference to Russia’s role in Armenia-Azerbaijan negotiations and accused the United States and France of canceling the OSCE Minsk Group which had already been out of the negotiations process since Azerbaijan’s military victory in 2020. While the “collapse” of the Minsk Group is in Azerbaijani interests (Baku considers the conflict as ended), it also may present a host of challenges as the Armenia-Azerbaijan negotiations will be part of an increasingly destabilizing zero-sum game between Russia and the West. Together with increasing anti-Azerbaijani hysteria in Russian media, Lavrov’s reference to Armenia as the “closest ally” in his comments on the Minsk Group and his open claim that the end of the process will sacrifice Armenian interests shows Russia feels challenged by Azerbaijan’s independent moves with regard to Ukraine war in general and tensions in Karabakh in particular. Azerbaijan will expectedly tap into its growing importance for both sides, engaging in multidirectional diplomacy to keep its options open and maximize benefits around the negotiations table.

For the time being, the February 22 declaration seems to have failed to guide the Azerbaijan-Russia alliance through the turning point in European geopolitics and how it will shape bilateral relations in the future will to the most extent depend on the direction of the war in Ukraine and changing balance of power in the region. With a more isolated Russia, Azerbaijan will have a stronger hand in a relatively permissive environment. But it by no means means that Azerbaijan will turn its back on Russia or join openly anti-Russia blocs in the region. Rather, Baku will engage in extreme geopolitical multitasking to make better use of its pivotal role in the emerging Eurasian order.