The Belarusian response to COVID-19 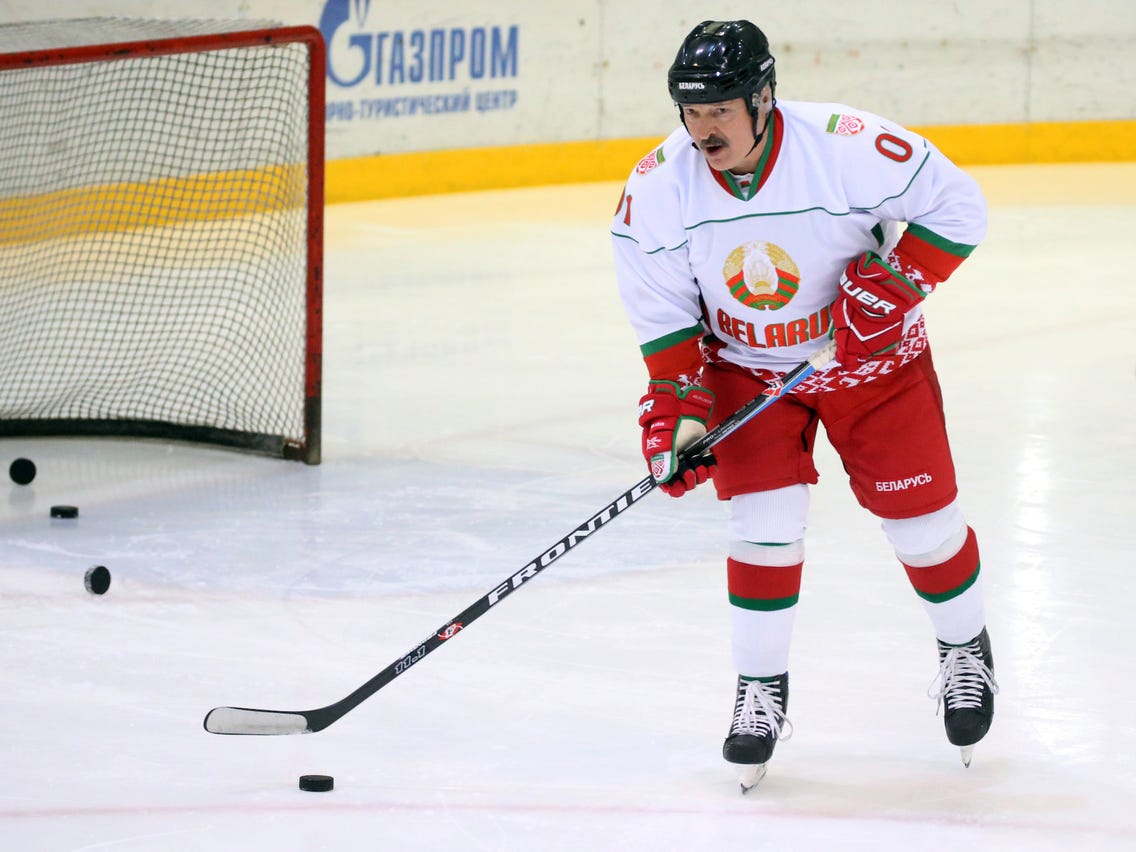 There has been considerable attention in the Western media to the comments of Belarusian president Aliaksandr Lukashenka that the virus is a psychosis that had adversely affected some countries, and that Belarusians in combatting it, should resort to folklorist notions such as vodka, the sauna, and the countryside. In late March, he was featured playing hockey. This simplistic and idiosyncratic response is fairly typical for the Belarusian president, but the reality is that his response to the medical crisis, and that of the authorities in general, has been ambiguous, ambivalent and misleading.

Although competitive professional football matches in the major leagues of Europe have been halted for some weeks, the Belarusian league opened its new season in March with all sixteen teams involved and crowds averaging several thousand, without any attempt at segregation. Next month, the Victory Day parade, particularly important for the authorities because it marks the 75th anniversary of the end of the Second World War, is scheduled to take place. Lukashenka is even entertaining the notion of attending both the one in Minsk and the celebrations in Moscow.

How serious is the situation in Belarus and how should one evaluate the response of Lukashenka and the Belarusian health authorities?

As of April 8, the number of positive cases of Covid-19 exceeded 1,000, with 13 reported deaths. Over 75% of the cases were in the city of Minsk, ostensibly because most of the testing is carried out in the capital city, the center of the health system. In Minsk city, a day earlier, 497 people were in the hospital, 25 had recovered, and 5 people had died. Five more deaths were reported in the Viciebsk region in the north, and the remaining three in the Minsk region, but outside the city. About 43,000 people had been tested.

On April 7, at the Palace of Independence, Lukashenka outlined his views. He maintained that there were three issues that concerned society and were of importance to the country’s economic system: oil supplies to refineries, the spring sowing campaign, and the health situation. Regarding the former, he noted that “the mass psychosis associated with the spread of the coronavirus” had spread to the world oil market and made it much more complex. The stable oil prices of $60 per barrel ended on March 31, and as a result of a clash between the two main players (he did not cite them by name but the reference was to Russia and Saudia Arabia), the price had suddenly dropped dramatically. The key problem was the uncertainty of the current climate.

He turned to the government and regional affiliates with the question about storing oil and stocks of petroleum products: oil was cheap and thus it was necessary to buy and store it before things change. Second, while Belarus had a plentiful supply of food, there were still some problems with sowing and dealing with frost in the soil: “Oil is oil,” he said, “but you cannot put it on the table.” He noted that—as has been the case for the past weeks—Belarus is seeking alternative supplies of oil to that delivered by pipeline from Russia.

Regarding COVID-19, Lukashenka related the health care situation directly to the economy. It was impossible to predict what would happen to the world after this “illness and psychosis” had ended. Leaders of large states might try to take advantage of the situation. Moreover, viruses are not new – they “come and go.” He cited approvingly U.S. President Donald Trump’s earlier comment that if people do not go to work, then more people will die than from coronavirus. Further, while the advance of the virus continued, it was not an avalanche. The health system could cope. It was not possible for Belarus, a small country with limited resources, to adopt the sort of stance that China had taken, i.e. a full lockdown of the affected province.

Lukashenka provided a list of major health diseases in the republic, all of which, he said, had resulted in far more deaths to date in the year than the thirteen from COVID-19. Doctors working on COVID-19 patients were being given bonuses. There should be no panic; rather “we must win beautifully, saving people with dignity.” Implicit in his remarks was that the Health Minister, Uladzimir Karanyk, had advised more drastic measures. Earlier (April 2), he fumed at the idea of confining people to their “rotten apartments” rather than allowing them fresh air.

The comments of the president appear to ignore the sharp rise in the incidence of the disease. It is evident, however, that the situation is very serious. On the border with Lithuania, for example, fifteen Russian workers at the Astraviec nuclear power station, which is on the verge of coming online, have been hospitalized in the town of Smarhon, after testing positive for COVID-19. The patients are contract workers from three companies under the general supervision of Atomstroiekspert in Moscow. Though it is not known exactly when they arrived in Belarus, they are assumed to have done so in late March, before Russia closed the border. Prior to the diagnosis, they were living in a dormitory and traveling to the plant site by bus. One report maintains that fifty people at the plant have been hospitalized.

The Response of the City of Minsk

On April 8, the Minsk City Executive Committee, on its own authority, approved a plan to prevent the spread of the disease. Measures that were formerly advisory are now mandatory. They include the following: enterprises and businesses must not allow workers with signs of cold to come to work; the number of workers per shift is to be limited, and there must be a break of thirty minutes between shifts; all organizations must be disinfected. Reading rooms in libraries have been closed, and exhibitions and presentations canceled.

Regarding schools and universities: for the former, the decision lies with parents, but they are no longer obligated to send their children to Minsk city schools, and then children must not go outside their own class. Universities “are recommended” to switch to online classes. There are to be no visits to elderly and disabled care centers. Weddings and banquets are to be canceled, and in the case of hair salons, for example, there must be only one client at a time and space of five minutes between clients. On the other hand, churches are to remain open with appropriate disinfection, which is also to be applied to entrances to residential buildings.

In short, local initiatives, while far from all-embracing, appear to be outpacing the directives of the president. Valery Karbalevich of the Strategy Analytical Centre in Minsk commented that Lukashenka “continues to make excuses for the lack of tough measures.” It would be easy for him to cancel the football season and the Victory Day parade, which would not destroy the economy. But the president wishes to prove that COVID-19 is nothing remarkable and is a world psychosis. Andrei Yeliseyeu, Director of the EAST analytical center in Warsaw, noted that it was not a choice between the current policy and strict quarantine. Various choices could be made that would not significantly affect the economy but would nonetheless reduce the number of interpersonal contacts. Andrei Porotnikov of the Belarus Security blog, in a similar vein, believes that Lukashenka’s comments reflect “a mixture of irritation and confusion.” As a result, he is threatening to use the military or other drastic measures if induced to impose a quarantine.

Lukashenka is indeed facing a dilemma in a year with presidential elections scheduled for August 30. The opposition is currently electing a single candidate through online voting. Though the president can anticipate re-election to extend his term in office to more than thirty years, he is traditionally quite tense through these periods. His personal situation is thus tied to the growing epidemic. If he imposes the full measures of the quarantine, the economy would in his view suffer and the country may take years to recover. If he declines to do this, then the peak of the virus could arrive much sooner than the current curve might suggest. The WHO is visiting Minsk currently for a three-day period, which further adds to the pressure. Two days ago, it received a petition signed by 150,000 Belarusians demanding an immediate population quarantine.

If one examines the development of Covid-19 in the country, the projection (based on figures provided by tut.by on the respective days) does look alarming:

The number of cases has thus tripled in the space of the last five days and yet the number of tests conducted is still relatively small. On April 19, churches will be open for Orthodox Easter celebrations, unless further precautions are taken. And by May 9, if the parade takes place, the virus could be approaching its peak. According to former presidential candidate Andrei Sannikau, the full parade may not be held, but rehearsals will take place regardless, endangering the lives of the troops taking part.

The consequences of lack of action in the early stage of the pandemic are painfully apparent in the United States; in Belarus, with 76% of the population urbanized, they could be devastating. The logical solution would be for the president to step aside and allow the health authorities the full authority to respond according to the best medical advice. That would likely ensure much more rigorous measures than taken to date and curtail the current alarming rise in cases. It is no longer practical to do nothing since local authorities are already taking basic precautionary steps. The decision lies in the hands of the only real authority in the country, Lukashenka, and he is running out of time.