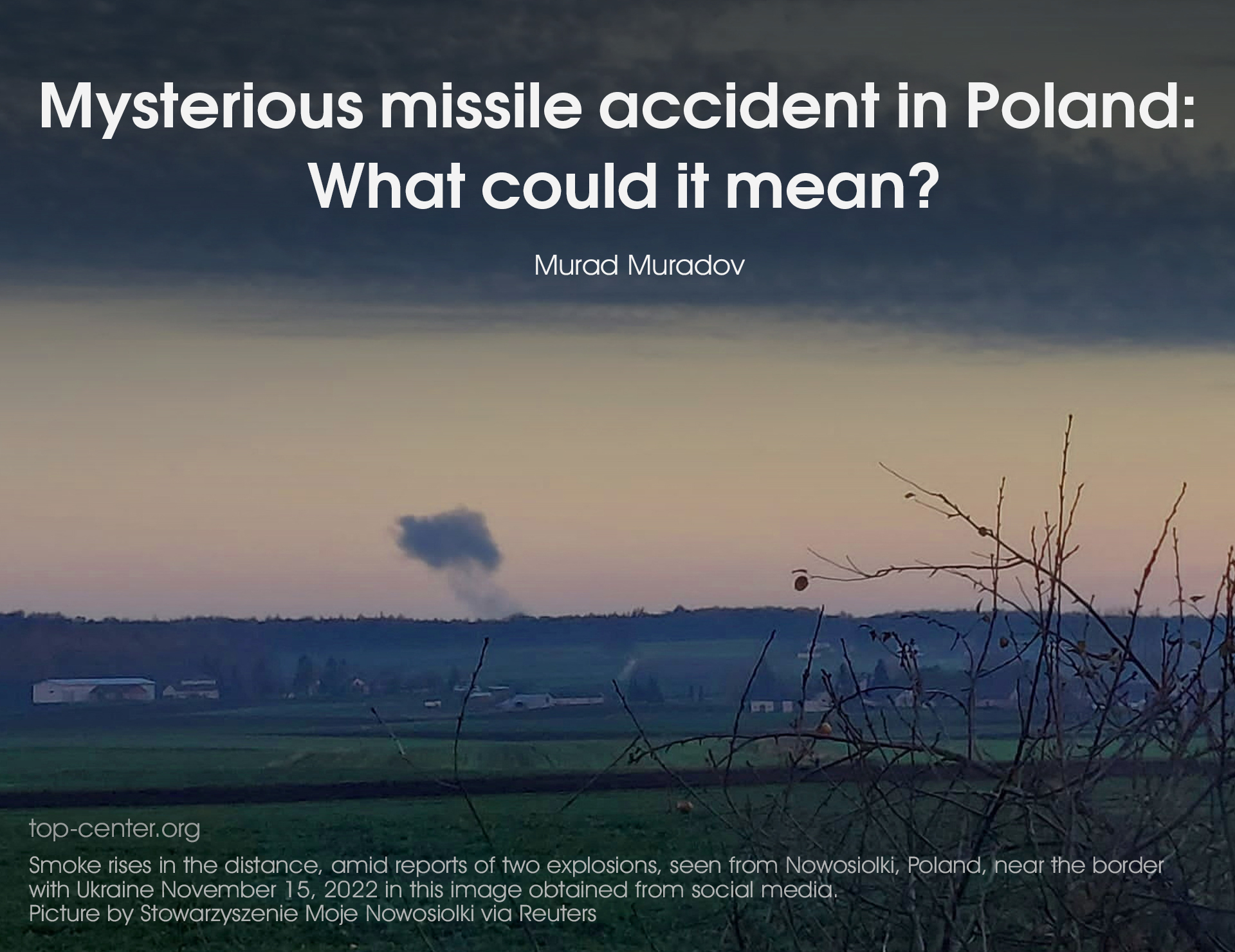 Almost immediately after a missile was reported to explode near the Polish village of Przewodow, allegedly killing 2 people, Poland and a number of Eastern European states, including Latvia, Estonia and Slovakia hastened to put the responsibility on Russia and raised the case for the implementation of Article 4 of the NATO Statute about consultations with the allies. The Polish leadership also blamed Russia, and claims were made that the missile was almost certainly of Russian origin. However, on the next day after consultations with NATO and the U.S. the Polish position suddenly changed: Prime Minister Duda stated that the missile was actually Ukrainian, most probably an air defense one launched in response to massive Russian bombardment of Ukraine on 15 November and accidentally landing the other side of the border with Poland. This statement came after NATO’s coordinated conclusion which cooled down experts and diplomats who had previously warned about a probable escalation of the conflict to a new level and more active NATO involvement. However, Ukraine’s President Zelenski, quite surprisingly, has continued to deny this version of events and insists that Russia was the immediate culprit.

These events occurred following several important signals suggesting that U.S. may have been actively pursuing to stop the war in Ukraine or at least put it on standby. Many experts believe Russian commandment’s decision to withdraw troops from Kherson and Lavrov’s trip to the G-20 summit on Bali are among the signs that some tangible offers are being actively discussed. There have been consistent rumours about a meeting between CIA Director William Burns and the Head of Russian FSB Patrushev in Turkey, as well of Burns’ subsequent trips to several other capitals, including Warsaw. Certainly, Washington’s reaction to the Przewodow accident which seems to have been ostentatiously opposing Eastern European willingness to turn on Moscow, can attest to its willingness to de-escalate.

Indeed, U.S. government may believe it is already time to start talking in earnest, as one side Russia has been substantially weakened, its army having born severe manpower and arms losses. Loopholes in the anti-Russian sanctions are being gradually closed, so it is now much harder for Moscow to maintain oil exports through gray schemes or ensure “alternative imports” of the Western high-tech goods through third countries. At the same time, after the significant losses in Kharkov and Kherson as well as hasty mobilization which for the first time since the 1980s brought the war into hundreds of thousands of Russian families, support for Putin does not seem as monolithic as it used to be, any more. Thus, Washington may believe that it would be easier to deal with a relatively weakened Russia with the not very popular government than to face the consequences of government change and possible recalibration of the whole Russian statehood. In this scenario, we could suggest the accident has been covered so extensively with the purpose of emphasizing the limits to U.S. and NATO aid to Ukraine and clearly signal the unwillingness to risk a full-fledged war with Russia.

On the other hand, several European countries have announced new air defense systems’ transfer to Ukraine. Sweden has approved a $287-million package of military aid to Ukraine, bigger than the previous aid combined, with ADS constituting its backbone. Swedish PM Ulf Kristersson has claimed that it is up for Ukraine to decide when and on which conditions Kyiv should resort to negotiations. At the same time, Germany’s PM Scholz, earlier often criticized for an “excessively soft” stance on Russia, also made a similar statement whereby he named Russia “ultimate culprit in any case” of the bomb landing in the Polish territory.

It seems that most European countries have lost their illusions of being able to bring the parties back to diplomacy in the track akin to dreaded Minsk and continue business almost as usual. If he gets peace with even a slightest easing of sanctions, Putin will probably try to rebuild Russian army and prepare new resources and strategies for the future round of fighting. Right now, the rate of missile usage by Russians considerably exceeds their capacity to produce new ones and Kremlin may well run out of them within several months even though the respective factories have been put on non-stop, 3-charge work. However, if he gets some breathing space with a ceasefire, Putin may well use this time for replenishing the stock of missiles and other strategic weaponry, train conscripts and re-build most critical military units many of whom have been destroyed in Ukraine. While he looks committed to the principle of “not changing horses during the battle”, in case of a temporary ceasefire Putin may also take bolder steps in replacing the high-level military commanders such as Defense Minister Shoygu and Chief of the General Staff Valeri Gerasimov, who have been under a severe criticism for manifold failures on the battleground.

That is why Ukraine cannot be enthusiastic about a prospect of diplomacy, either. Kyiv understands very well that if arms are put down, ensuring steady enough military support from the Western partners will be far more difficult. As the daily pressure from the public opinion outraged by Russian bombings and other atrocities will wane, it will be much easier for the skeptical circles to promote their agenda of trying to find common ground with Moscow and stop supplying Ukraine with weapons. In fact, many of them, including the far-right wing of the U.S. Republicans (people such as Tucker Carlson, for example), have already seized the opportunity of the Polish accident to call Zelensky a warmonger and a liability on the West. Economic problems will weigh much higher on the Western political agenda, making the governments more prone to compromises. At the same time, the left-humanitarian lobby will also be vocal in their calls to abstain from further military aid in order not to spoil the fragile “peace”. Big business, interested in investment into the reconstruction of the Ukrainian economy, will probably try to ensure that some kind of agreement with Russia is achieved to minimize the risks of a new war and secure their would-be investment.

Finally, ending the war with even minor and dubious success (such as retaining the pre-24.02 de-facto borders) can enable Putin to bolster his power vertical which seems to be giving cracks. Radical warmongers such as Ramzan Kadyrov and Yevgeny Prigozhin, head of the infamous Wagner Group private military company, have been among the few beneficiaries of this war in Russia. As the fighting capacity of their paramilitaries stands out from the poorly equipped and trained regular Russian forces, they start to punch above their weight, especially Prigozhin: “Putin’s cook”, as he is often dubbed, openly calls to do purge “traitors” among whose ranks Prigozhin names his arch-enemy, St. Petersburg’s governor Alexander Beglov, and clearly takes prides in the extrajudicial methods his people use, the latest one being the violent videotaped execution of the Wagner fighter who had earlier switched sides and surrendered to Ukraine. These men are already compared by many experts to legendary oprichniks of Tzar Ivan the Terrible, who was established to terrorize the elite and break down any opposition to the consolidating tyranny of the monarch. However, there are also suggestions that if Putin and regular Russian state continue to suffer painful losses in Ukraine and prefer a withdrawal to all-in escalation, these oprichniks might even try to topple the government to establish a kind of military junta that would wage a total war at any cost. On the other hand, the continuation of the war with the outcomes unfavourable for Russia might bring it into turbulence causing a cascade downfall of defense lines in Ukraine.

Hence, it hardly tenable for Kyiv now to seek peace on any conditions other than unconditional withdrawal of the Russian forces from the whole of its officially recognized territory (maybe with the exception of Crimea). Though many experts warn of a danger of a new large-scale Russian offensive – probably from the northern border towards Kyiv – in winter when the ground becomes quite firm, it could hardly stand serious chances for success. Newly mobilized Russian troops suffer from significant shortages of proper ammunition and equipment, while the lack of quality winter clothing and possible outbreaks of seasonal flu and other cold-season deceases might inflict fatal blows on the Russian troops’ fighting capacity. However cynical it may sound, currently Ukraine might be interested in a major accident which would consolidate the position of those circles in the West supporting maximum help to Ukraine until a triumphant end in the war.