What is behind the recent escalation of violence in Karabakh? 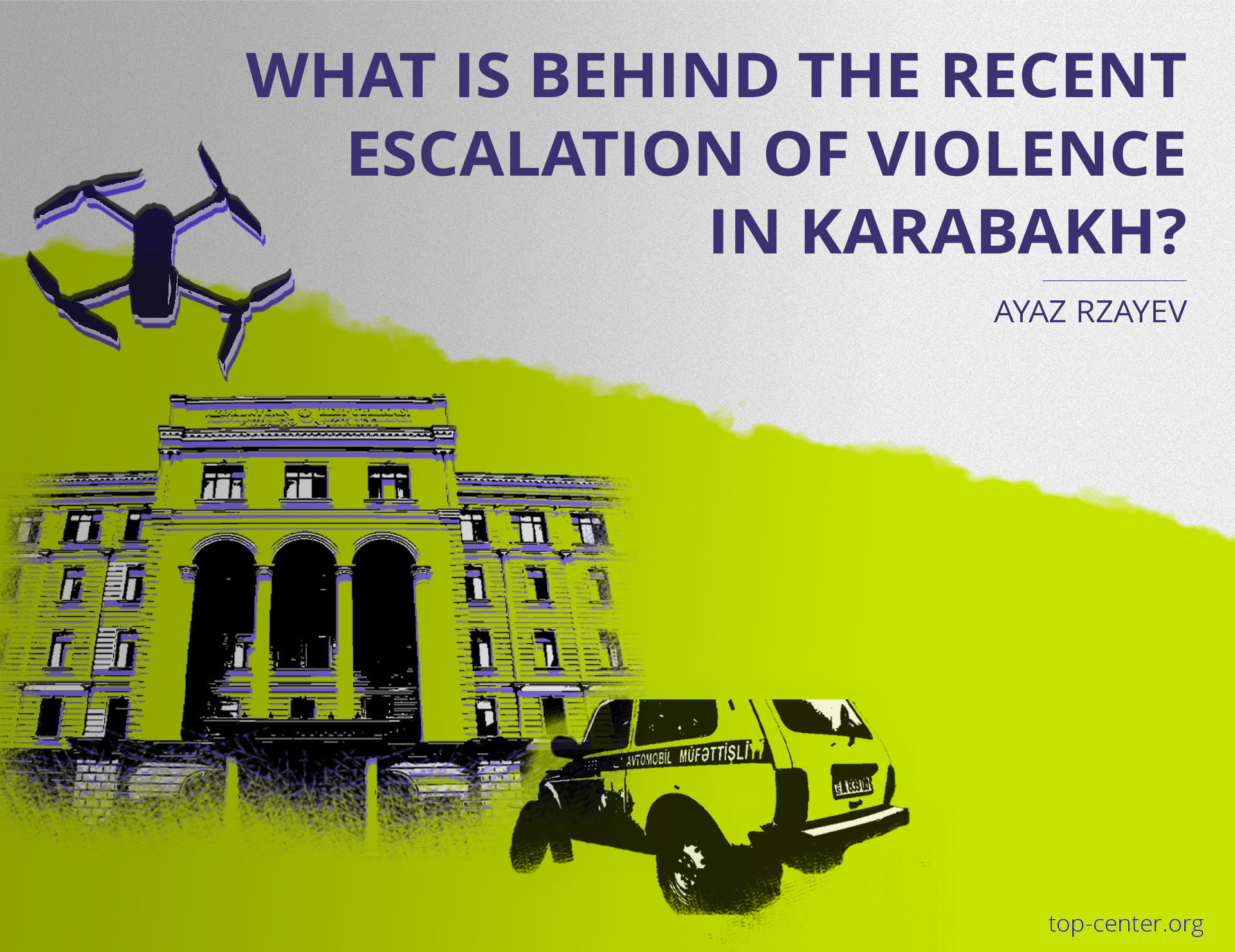 On October 13, the Azerbaijani Defence Ministry announced that a civilian column of vehicles came under fire in Karabakh. “On October 13, at about 14:00, a column of vehicles with non-military cargo moving from Sugovushan settlement of Tartar region to Kalbajar region to build civil infrastructure in Kalbajar region was subjected to fire by illegal Armenian armed detachments near Gozlukorpu settlement,” the statement said. Although the Armenian side denied the report, the Russian peacekeeping contingent in Karabakh confirmed on its official website that a column of Azerbaijani vehicles carrying construction materials, which was being escorted by Russian peacekeeping troops, came under fire near the Sarsang water reservoir on October 13. On October 14, the Azerbaijani Defence Ministry said that an Armenian reconnaissance quadcopter was intercepted in Fuzuli District on 14 October. Again, the Armenian side tried to deny the report, but the Azerbaijani Defence Ministry promptly published pictures of the drone.

In the evening of October 14, the Armenian side sharply escalated the situation on the ground by killing the Azerbaijani soldier Afgan Hamzayev. The Azerbaijani Defence Ministry said that the serviceman was killed as a result of sniper fire opened by illegal Armenian armed detachments, warning that “decisive steps will be taken to neutralize the illegal Armenian armed detachments that committed the terrorist act”. The Azerbaijani Defence Ministry also noted that “the terrorist act committed by Armenian-backed Armenian illegal military detachments during the meeting of the Foreign Ministers of Armenia and Azerbaijan in Minsk with the mediation of the Russian Federation is a deliberate provocation. This is another proof of Armenia's policy of deliberately aggravating the situation in the region, obstructing the implementation of the provisions of the Joint Statement signed on November 10, 2020, and overshadowing the activities of Russian peacekeepers”, adding that “a request has been sent to the Russian-Turkish Joint Monitoring Center to investigate this terrorist act”.

In the morning of October 15, the Armenian military again tried to attack the positions of the Azerbaijani Armed Forces in the Aghdere direction of Karabakh, hiding behind a civilian ambulance. “As a result of the measures taken, this attempt was thwarted, and the Armenians in the ambulance were forced to return," the press service of the Azerbaijani Defence Ministry noted in its statement.

The Armenian side not only refused to take any responsibility for recent provocations but also, and more importantly, started accusing Russia of playing bothsidesism and not calling out Azerbaijan, which, in their opinion, is the true instigator of violence in the region. Some on the Armenian side went even further, claiming that the Russian peacekeepers are in cahoots with Azerbaijan. They accused the Russian peacekeepers of deliberately setting up the Armenian forces to fail and creating a favorable environment for the Azerbaijani attacks. However, blaming Russia for not “calling out” Azerbaijan or even intentionally failing to prevent the ceasefire breaches does not make much sense from a Russian perspective. First of all, Russia is interested in preventing violence and ensuring stability in the region. Moscow understands that if it fails to do that the Armenian population will just leave the region, effectively putting an end to their military presence in the region as well. And secondly, until now Russia has had no qualms about accusing Azerbaijan of supposed violations of the ceasefire.

In fact, in August, the Russian Ministry of Defence did exactly that when it accused Azerbaijan of violating the ceasefire. “Over the past 24 hours, one ceasefire violation has been recorded. On 11 August 2021, at 07:29 and 07:58, the Azerbaijani armed forces carried out two strikes using strike-type quadcopters [drones] on a position of the armed formations of Nagorno-Karabakh’, the ministry said in a statement. On September 18, the Russian Defence Ministry again accused Azerbaijan of breaching the ceasefire noting that in the proximity of Shusha, “three attacks on the positions of the armed formations of Nagorno-Karabakh” were registered a day before, underscoring that “according to the Armenian side, the fire was opened from the positions of the armed forces of the Azerbaijani Republic. As a result of the fire, two servicemen of the Nagorno-Karabakh armed formations were wounded.” Reacting to this statement, the Ministry of Defense of Azerbaijan said that the Russian Defence Ministry's report was “surprising and regrettable”, adding that Azerbaijani representatives and Russian peacekeepers had investigated the incident. “As a result, it was established that the Azerbaijan Army units did not open fire on the indicated date in this direction. It is not certain that the information studied with the participation of both parties was subsequently presented in a completely different way. The Azerbaijani side continues its efforts to ensure stability in the region and prevent possible provocations in accordance with the legislation of our country, strictly adhering to the provisions of the Joint Statement,” Deputy Chief of the Press Service of the Ministry of Defense, Lieutenant Colonel Anar Eyvazov noted.

Thus, Russia does not have any problem with antagonizing Azerbaijan. In reality, what Russia really does not want to do is to alienate the Armenian side by calling out the true violators of the ceasefire regime. According to the trilateral agreement signed on November 10, the deployment of the Russian peacekeepers should have been carried out simultaneously with the withdrawal of the Armenian military from Karabakh.

However, up until now, Russia has been reluctant to push Armenian troops out of the territories under their control. One reason for this is that Russia recognizes their potential usefulness in maintaining leverage over Azerbaijan. If there is ever a need to strengthen Moscow’s hand in negotiations or send a message to Baku without resorting to open conflict, Russia could always use them as proxies. From a Russian perspective, they are in a way an extra insurance against future uncertainties. Russia does not really need them but also does not want to weaken its hand unnecessarily.

However, that does not mean that currently Russia’s interests in Karabakh are aligned with those of the Armenian armed formations. Unlike in Eastern Ukraine or South Ossetia, as of yet, there is no organic patron-client bonds or symbiotic relationship between Russia and Armenian armed entities in Karabakh. Those militant groups are not fully under Moscow’s control – and this is the main reason why violence keeps rising in territories where Russian peacekeepers are deployed.

There are many senior current and former military figures and field commanders in the Armenian military who are deeply frustrated with the current status quo. After all, they were primary beneficiaries of the political and economic system that existed in the occupied Azerbaijani territories for the last 30 years. Throughout this period, the Armenian field commanders and top military brass were the backbones of the local business elites. Senior military figures dominated the local economy and were able to operate without any significant oversight. After the defeat in the 44-day war, however, they lost all their economic privileges and were cast aside. Their hope that with the arrival of the Russian peacekeepers, they would be able to claw back and reclaim the position at the top did not become a reality. Thus, they decided to take the matter into their own hand. By destabilizing the situation on the ground, stirring up troubles, violating the ceasefire regime, and committing various provocations, coupled with an organized disinformation campaign targeting the Russian peacekeepers in Armenia, they want to force Russia to reckon with them and thus gain a seat at the proverbial table.

Praising the killing of the Azerbaijani soldier Afgan Hamzayev by an Armenian sniper, some influential Armenian Telegram channels boasted that both the murder and earlier firing at the Azerbaijani convoy were done by “patriotic” elements inside the Armenian military who are fed up with the current situation.

In parallel with violations of the ceasefire regime and drastic rise in provocations in the region, the National Democratic Pole movement, an Armenian political alliance that includes the far-right Sasna Tsrer Party, has announced the launch of “a civil disobedience campaign” against the Armenian government and Russia. “We are starting acts of civil disobedience. They include blocking streets, surrounding buildings and putting up barricades to declare a transitional government,” Jirair Sefilian, former military commander and one of the key figures in Sasna Tsrer party, declared while addressing a rally in Yerevan on 15 October. Sefilian underscored the importance of ensuring a high turnout during the rallies in order “to form a transitional government, to hold traitors accountable and ensure the physical safety of the country and the nation with Armenia's real partners”. Addressing the rally, Garegin Chugaszyan, another member of the National Democratic Pole movement, argued that the current government was incapable of ensuring Armenia’s interests. Chugaszyan accused the government of serving Russia and Turkey's interests and criticized Russian President Vladimir Putin for his “imperial wishes”.

The timing of these provocations also matters. On October 15, during the online meeting of the Commonwealth of Independent States (CIS) heads of state, Armenian Prime Minister Nikol Pashinyan said that his country is ready to work for peace in the region. “We are determined and we will do everything possible to establish peace and stability in the region. We have a clear vision on how to achieve this goal - through dialogue and by overcoming the atmosphere of hatred and enmity and opening economic and transport communications. This is the only path that will lead us to this goal,” Pashinyan noted, adding that “Armenia will have a railway and land communication with Russia, a railway connection with Iran through the territory of Azerbaijan, and Azerbaijan will receive a railway and road connection with Nakhchivan through the territory of Armenia”. Speaking before Pashinyan at the CIS summit, Azerbaijani President Ilham Aliyev also reiterated Baku’s readiness to normalize relation and to start negotiations on a peace agreement with Armenia. “We hope that the leadership of Armenia will not miss this historic chance,” he underscored.

All of this puts Russia in a very uncomfortable position. On the one hand, Russia does want to ensure security and stability in the region, at least in the near term. On the other, Moscow is reluctant to openly call out the Armenian side for recent provocations and face resentment and discontent from already angry and frustrated Armenians. Whatever the reason might be, the fact remains that the Russian peacekeepers are there to prevent exactly this kind of provocations, and they need to start doing their job right away. If they are incapable of controlling the situation and reigning those armed groups in, they need to step aside and let Azerbaijan step in.