War in Ukraine: what does it promise for Russia? 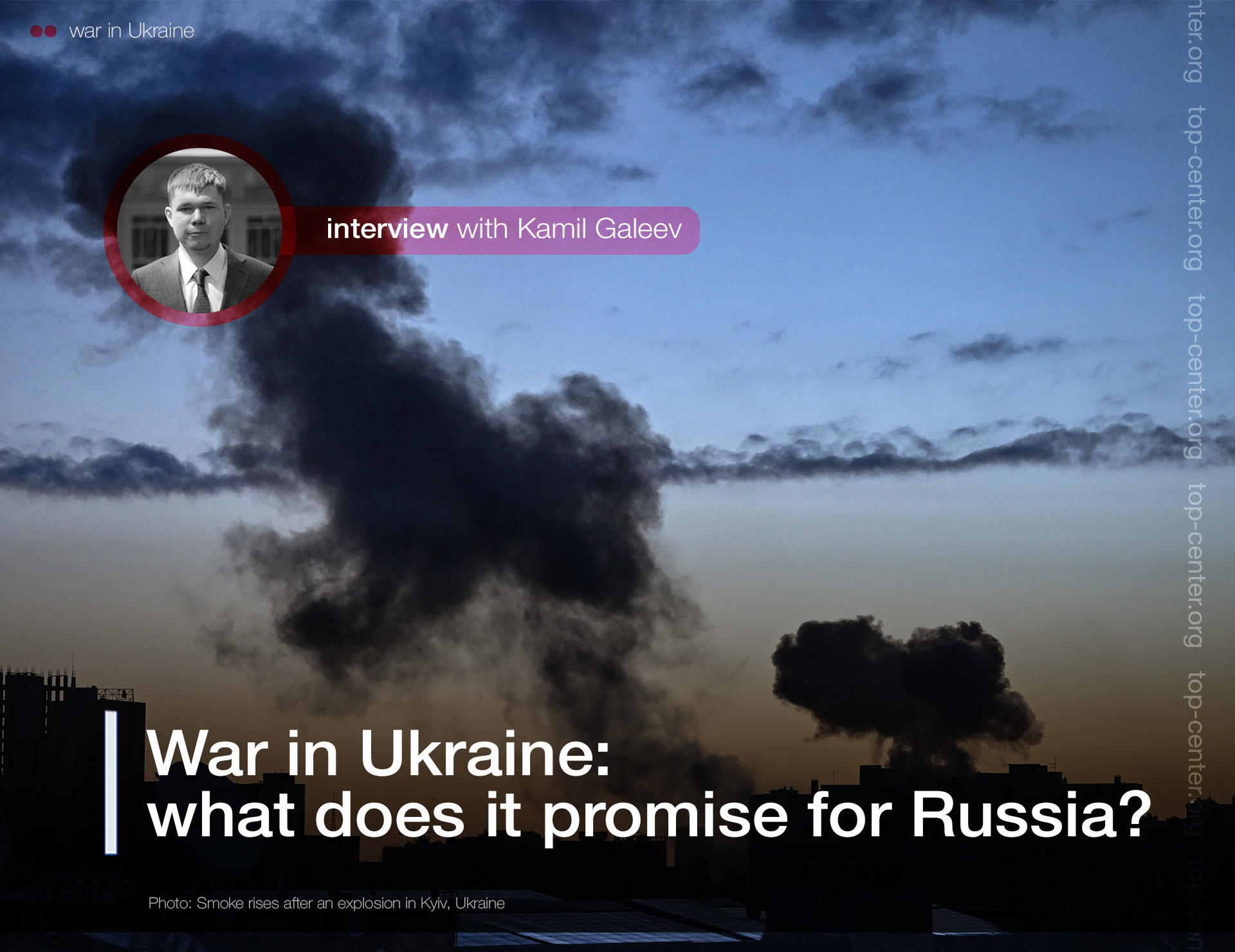 For the past few weeks, the focus of politicians and international observers has been on the current conflict in Ukraine, initiated by Putin`s Russia. There are a lot of questions about the strategic rationale behind the Kremlin’s moves, the ongoing developments in Ukraine and Russia, and the future scenarios that Russia may face. Today, we sat down with Mr. Kamil Galeev, an independent researcher, to discuss different aspects of war in Ukraine and its possible repercussions for Russian foreign policy in the foreseeable future.

R.H: How could you explain the decision to start this war and to conduct it in the way it is? Is it a mere irrationality of Putin and/or his closest circle or it just reflects the horrible quality of governance and decision-making in modern Russia?

K.G: I would say it is not irrational because if you look at Putin`s strategy it would be always to initiate the conflict, to manufacture the crisis, and then come out as a savior, collect the payout and be showered in public gratitude. He did it in Chechnya to consolidate his power, then he did it in Georgia, then he did it in Syria, now in Ukraine. So, you see a clear factor, which cables up every time. With Ukraine, I think, there was a miscalculation, because simply speaking his state security field department, obviously has lied to him, as it often happens subordinates will just report to the hierarchs whatever they wanted to hear and avoid providing unpleasant information. And it seems they informed Putin that Ukraine will not resist, that army, military, police are pro-Russian and they will just run away as soon as Russian forces showed up and apparently, Putin attacked Ukraine based on this assumption, which appeared to be wrong because he also stated that his security lied to him. So, now he is in a pretty difficult position because he is misinformed by his own intelligence.

R.H:  So they were expecting basically Crimea scenario?

K.G: I think, we should make a difference because his intelligence officers were not sure what to expect, they just reported whatever he wanted to hear, and he himself was disinformed. He most probably expected more or less Crimea scenario, or at best, Ukraine to fall, with Ukraine army really failing to resist Russian incursion. What we are seeing is Russia’s conflict manufacturing strategy it applied since the occupation of Donbas in 2014 has just backfired on Putin. Most importantly, Russians are shocked by the resistance they are facing in the Russophone East Ukraine whom they expected to switch to Russian side on the early days of war. At least, this part of Ukraine voted for pro-Russian candidates on every election till 2014.

Russia could present the conflict in Donbas as the Ukrainian problem to both internal and external audiences. But it was impossible to present it as such to the Ukrainians, including the eastern part of the country. People in Kharkiv, Sumi, Mariupol and other major cities in this part of Ukraine saw lawlessness, gangs robbing people, killing, torturing, etc. in Donetsk and Luhansk. Nothing comparable was happening on Ukraine-controlled territories. So they would never agree to the Russian invasion turning their cities into Donbas.


R.H: Does Putin retain any feasible opportunities to escape from this crisis safe? Do you see a possibility of Russia de-escalating and eventually drifting towards the North Korea-style monolithically totalitarian state?

K.G: I see two possibilities. One is the fall of the regime which is much more possible than many people would assume. Historically speaking, nothing is more dangerous for regime security in Russia than a defeat in a small victorious war. Soviet defeat in Afghanistan was detrimental to Soviet mythos that delegitimized the regime, eventually leading to its collapse in 1991. Defeat in Russo-Japanese War in 1905 dealt a huge blow to the Russian empire that it could not survive. If continued to fight the Japanese, Russians had chances for success but defeat from a weaker and presumably inferior enemy was a shame that destroyed the imperial mythos. Thus, Putin’s regime can survive poverty, stagnation, and political repressions but it can hardly survive defeat in a small victorious war.

Another possibility is Russia turning into a sort of North Korea. So, it is quite possible, I would assess this scenario as 35% that Russia will close up and become something like North Korea.

R.H: How do you estimate the Western response to Russian aggression? Do you see any evidence that Western elites are still afraid of Putin or they are doing the best they could to stop him? And by the way, is the goal to simply contain Putin or to achieve total de-Putinisation of Russia?

K.G: I think sanctions are quite effective and basically, very soon they will strict Putin`s opportunity to prolong the war, which means that he will not be able to launch it by poorly conventional means. Many underestimate Russia’s dependence on technological imports from the West. Yes, Russia produces a lot of stuff but big majority of it goes to the internal market. However, in industrial production, Russia is deeply integrated into the Western technological chains. What Russia actually produces is produced on Western industrial machines, with Western technologies and with mostly Western software. This, of course, includes the military industry, too.

When it comes to escalation, I think he may do escalate and I am really concerned about him using some tactical nukes or more bombs in Ukraine.

R.H: What do you think about the predominant support for the "Z" campaign within Russia? Is it a mere loyalty of the "silent majority" or real indoctrination?

K.G: I see support is real, indeed, many do support it. Although it was Vladimir Putin’s decision to start this war, it got a wide support from the Russian people. In most cases, nobody force them to participate in these shows of support for the “Z” campaign, they can just skip it. But they cheer because it makes them feel proud. Proud that Russia has become great again.

But I would say that it probably will decrease with the economic collapse of Russia.

R.H: If the humiliating defeat becomes a reality, how will it affect Russia? What future scenarios do you see?

K.G: We already see problems emerge in the Russian economy. Russia is heavily dependent on imports, its imports whatever components for machinery. Basically, the production of machinery in Russia will stop very-very soon because it simply doesn't produce enough components. So, if sanctions continue Russia will soon experience economic chaos and will not be able to maintain the technological changes necessary for the continuation of this war.

R.H: If the conflict gets protracted and expands, how it will affect the global economy and way of life and do you think the hedonistic global culture will be able to adapt?

K.G: Unfortunately, this threat is very real, and if the war continues it will be absolutely real. Because right now, for example, without the export from Ukraine and Russia  the price of wheat will rise significantly, which will hurt the Middle Eastern countries very much.

And the lack of money transfers from migrants in Russia to Central Asia will significantly hurt the region and especially Kyrgyzstan and Tajikistan, which might entail social-economic catastrophe there.

*This interview has been edited for length and clarity.