With Russia and Iran sanctioned, Middle Corridor has a chance to establish itself as a viable route in the East-West trade 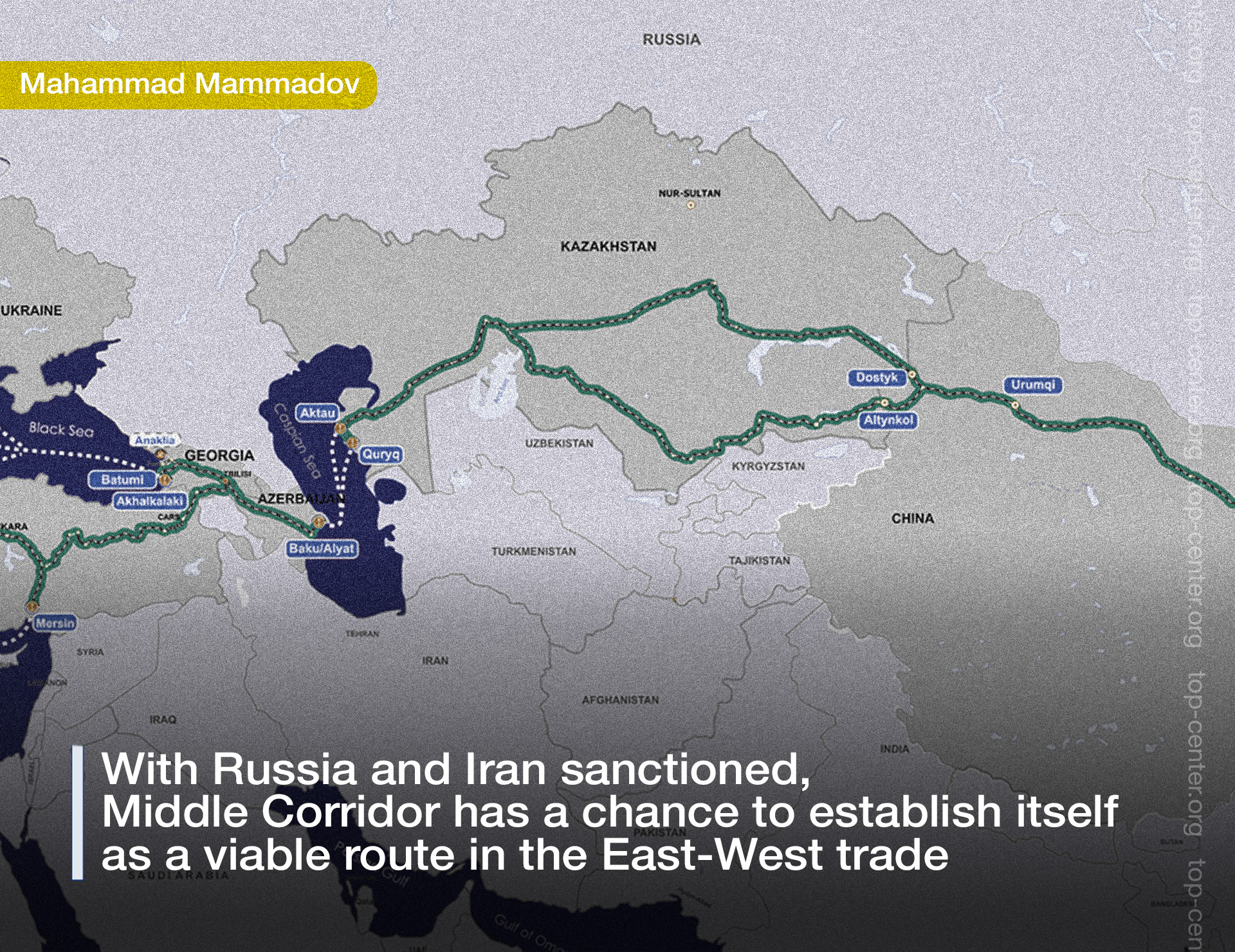 Russia’s ongoing military operation to invade Ukraine has expectedly sent a chilling effect across the global supply chains as more ships are stuck in international waters than at any point since the Second World War and large logistics companies announced they would no longer take orders to ship goods by rail, barge or truck to and from Russia. With unprecedented Western sanctions levied on Russia, major European ports such as Rotterdam and Hamburg refused to reload cargo destined to the country. In the Black Sea, Russia’s military maneuvering around the major port cities closed the door of the world’s second-largest grain exporting region to the global market, pushing the wheat prices through the roof. Ukrainian leadership has already declared suspending operations in the Black Sea, diverting cargo ships to the ports of the neighboring countries.

Russia, like many other countries, is reliant for the bulk of its international trade on the sea and air routes but the stiff pressure it faces in the Baltic and Black seas and also on the air might push her to look for alternative transport modalities such as the Trans-Siberian Railway. An essential link in China’s Silk Road Economic Belt, this route (also called Eurasian Land Bridge) connects China with Europe, running through Kazakhstan, Russia, and Belarus. Free movement of goods and services within the Eurasian Economic Union facilitates cargo freight between China’s northwestern provinces and Małaszewicze terminal in Poland, making the route the most attractive option for the Chinese rail operators and European logistics companies. In past years Deutche Bahn and China Railway Express gained significant revenues with closer coordination of services and transit countries earned a lot from transit fees. Not surprisingly, transit through Russia accounts for more than 90 percent of intercontinental rail traffic, with it being faster than sea transport and cheaper than air freight. But the situation might change after Russia’s invasion of Ukraine as some observers assert that volumes of trade via this route have already been decreasing and certain parts of it is shifting to other modalities. Although the Ukraine-related sanctions do not prevent customers and logistics companies from working with the Russian railways, many still prefer avoiding this route due to growing uncertainty emanating from Russia’s invasion of Ukrainian territories.

Taking into account that Iran is also under sanctions, the Middle Corridor (or Trans-Caspian International Transport Route) passing through Kazakhstan, the Caspian Sea, Azerbaijan, Georgia and Turkey to Europe could emerge as a viable option for the East-West trade. It has long been prevailing wisdom among the regional watchers that gradually increasing use of the Middle Corridor in previous years was related mostly to users’ deep concerns about possible destabilization of states that form the Northern corridor. Therefore, the insecurity environment Russia created in the recent months opens up certain avenues for the Middle Corridor countries to use the moment to ramp up their position in the international transport connectivity. Azerbaijan and Kazakhstan has long been major stakeholders in the development of this route. The construction of the Baku-Tbilisi-Kars railway, further development of Kazakhstan’s railroad system, and modernization of ports (Alat, Aktau, Kuryk, Turkmenbashi) in the Caspian Sea highly decreased the transport time for goods delivered from China to Europe or vice versa. In the absence of meaningful support from China (central government or provinces), Turkey also can play an essential role in shaping the future of the route. In December 2021, Turkey’s minister of transport and infrastructure claimed that the government will increase rail freight investments by 60 percent as Turkey aims to divert 30 percent of the cargo volumes passing through Russia to the Middle Corridor. If the Turkish side is committed to the realization of such an ambitious plan, sanctions on Russia can only facilitate this process.

Since the declaration of sanctions on Russia, Azerbaijan and Kazakhstan have already started to take certain steps in this direction. In the meeting of operational headquarters for anti-crisis measures on March 7, Kazakhstani officials called for an increase in the volume of transportation through the TITR. On March 9, the Kazakh delegation led by Kazakhstan National Wealth Fund Samruk Kazina’s board chairman Almasadam Satkaliyev met Azerbaijan’s Minister of Economy and heads of large companies in Baku. The two sides signed a protocol to establish a joint venture for the further development of the Middle Corridor to adapt it to the new realities in the region. The document sets to bolster the soft infrastructure potential of the TITR by resolving issues related to tariff setting and cargo declaration and applying IT solutions to consolidate transit cargo on the route. On March 9-10, Kazakhstan’s Ministry of Industry representatives met their Azerbaijani and Georgian counterparts to discuss smooth transit of Kazakh and transit cargo to Europe.  All these would especially make it easier for Kazakhstan to avoid territory of sanctions-hit Russia and reorient some part of its oil and grain exports towards Azerbaijan, Georgia, and Turkey to the global market. At the same time, it could increase the number of rail services using the Middle Corridor as the shortest and most reliable route between China and Europe.

However, with all this optimism, Middle Corridor still has a mountain to climb to establish itself as a viable route for intercontinental trade. Firstly, Chinese provinces which are the main backers of the EU-China rail transport through subsidies for the rail operators under their control do not seem invested in the idea of using this corridor in a larger scale. At the same time, Beijing considers leaving the development of intercontinental trade connections to the market mechanisms, hence gradually phasing out the subsidies. For example, if the rail freight was subsidized 50 percent in 2018, this number dropped to 40 percent in 2019, and 30 percent in 2020. The Chinese government declared to end all subsidies in 2022 but last year it was extended to 2023. In December, Azerbaijan’s ADY Container launched a new rail service to Xian province - one of the most generous Chinese provinces on subsidies. In general, to what extent recent sanctions on Russia and China’s policy responses will change the main interlocutors’ calculus on the Middle Corridor remains to be seen.

Secondly, the TITR is a multimodal route that makes it relatively unattractive for cargo forwarders. Containers should be loaded to ships in Kazakhstan’s ports (Aktau, Kuryk) in the Caspian Sea and reloaded to the railroad in Azerbaijan. The severe weather conditions in the Caspian Sea create further bottlenecks along the route. Thirdly, Middle Corridor countries have weaker hard infrastructure capabilities. The number of Ro-Ro ships is still low and needs qualitative development to accommodate trade between Europe and Asia. In December 2021, a 50 40-foot container cargo from Xian to Baku was transported in 23 days (quite a long time) due to bad weather and lack of vessels. Last but not the least, the Middle Corridor countries need further simplification and harmonization of regulatory and customs procedures for the transit cargo. Compared to the northern route in the TITR rail freight have to pass through six different customs control. Recent talks between Azerbaijan, Georgia, and Kazakhstan were a necessary step forward in this regard and relatively more active involvement of the EU, China, and Turkey could make the route a viable alternative to the sanctioned Russia.