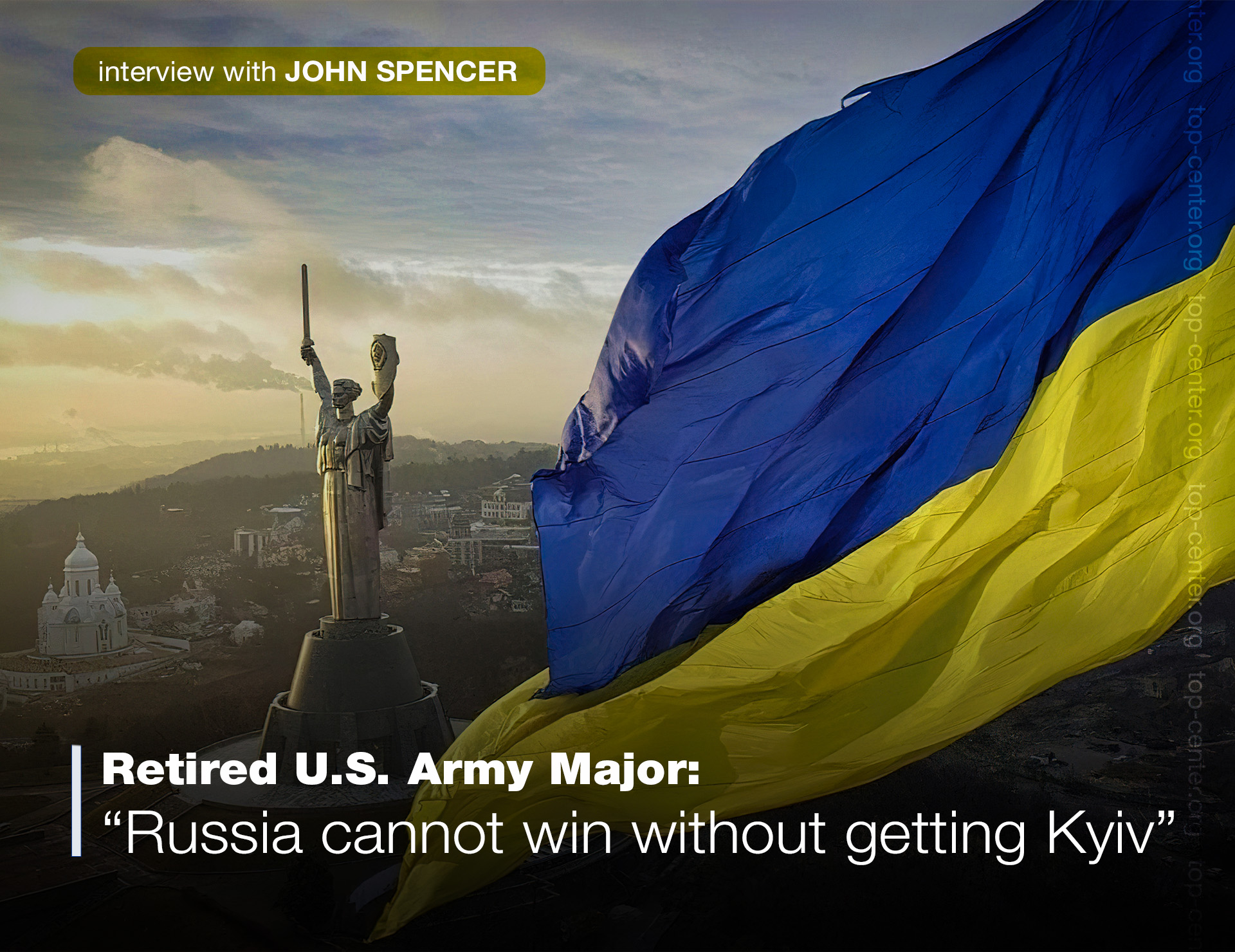 Russia’s invasion of Ukrainian territories continues to this day with Russian forces shelling major city centers in the north, east, and south of the country. Against the expectations of many in Russia, Ukrainian armed forces and the local population put up a heroic resistance that significantly increased the costs for Moscow. Western sanctions on the commanding heights of the Russian economy further restrained its maneuvering space in politico-military and socio-economic terms.

Recent days saw destructive battles for the control of major cities, Kyiv being the main target, and in this interview, we sit down with John Spencer, retired U.S. Army Major and urban warfare expert, to discuss major military developments in Ukraine.

Could you please estimate the first week of the military operations in Ukraine?

Thus far, at the initial stage of the fighting, we witnessed the Russian military bet on using speed instead of combat power. They clearly tried to achieve a blitzkrieg, making the Ukraine campaign “a small victorious war”. We also saw Russia trying to quickly outmaneuver Ukrainian forces to seize the Kyiv airport and a number of other important airports; the commanders clearly hoped to push the defending Ukrainians into traps in the strategy much alike to that the U.S.-led coalition successfully applied in Iraq 2003, managing to shock the rival.

However, very soon it became clear that Russia was facing much trouble trying to implement their strategy as their forces have faced a much stronger resistance than they thought they would. The Russian faced a lot of setbacks; they still don’t control the air which is really crucial when for the success of military operations of this kind. However, we must admit that the invading army is still going forward, they haven’t completely stopped in spite of being considerably stalled. They have visibly modified their strategy and switched to pushing combat power into Ukraine with the purpose of taking the critical cities, seaports, and other infrastructural hubs. The primary goal is definitely to take Kyiv with the view of installing a puppet government and claiming that basically, Ukraine is now Russia. They can’t win without getting established in the political center of power. The resistance Ukrainians have been putting is this far winning over; it must be kept in mind that in the situation they are into, not losing will already mean a massive victory. The willingness of the majority of civilians to support the army in various ways is still unwavering, so we will probably continue to witness a conventional fight, which is far from over; in fact, it has only just begun. Unlike the war in Iraq, or even Azerbaijan’s military operation in Karabakh, you cannot drive wherever you want in Ukraine right now; the ground is soft and you have to stick to the roads. That’s why Russian troops face a lot of trouble running out of fuel, their vehicles breaking down which ultimately results in their columns having to stay in the line on the roads and becoming easy prey for Ukrainians whose use of Bayraktar on these targets (just as Azerbaijan did in 2020) has definitely had its impact.

One important factor must be emphasized: the whole Western land border of Ukraine remains open which enables NATO and other allies and friends of Ukraine to maintain the steady supply of military assistance, humanitarian aid, etc. However, if Russians manage to cut it off, this may indicate the turn to the gloomy stage of the conflict when Ukrainian cities will not be able to re-supply themselves anymore.

Do you think it’s rational for Russians to bet on taking big cities? Even if they do, don’t you think they will become easy targets for fighters within the cities? And what meaning will the military victory have without a political one?

The reality of the Ukrainian war has been showing the world that the Russian army is not as competent as it was believed to be. Even technologically they are not that particularly advanced and Russian aviation still remains vulnerable to Ukrainian air defense, severely damage in the first hours of the conflict.

It’s still hard to tell how much resistance the Russian troops might face in big cities if they manage to capture them. Usually, civilians get scared, so many of them will ultimately be subject. However, I believe this is not a recent prospect as the degree of solidarity among the Ukrainian people has been indeed tremendous; their level of resistance has surprised even me, Ukrainians seem to fight all like one person. Russia will likely experience urban insurgency of the degree Americans experienced in Iraq, to their dismay.

If Ukraine’s big cities get totally encircled, how much time do you think they will be able to resist?

Let’s say if they surround and isolate Kyiv - I don’t think there will be a siege. Kyiv has the potential to hold out for a month at the very least. Think about the battle of Mosul that happened in 2016. ISIS terrorists had much more time to prepare- two years, basically, and they had erected a massive defensive belt around the city. Despite 100,000-strong troops of the anti-terrorist coalition, supported by the mightiest airpower in the world, it took nine months to take Mosul, and the coalition forces ultimately had to take it bloc by bloc, house by house, so Iraq paid a large price for destroying ISIS. Numbers often don’t matter as much as the combination of will and fighting capacity. Ukrainians demonstrate they have both and they value their country so much that they are ready to pay an ultimate price. I don’t think Russian soldiers are willing to pay the ultimate price for taking Kyiv (but probably Putin is).

There are a lot of talks now about the insufficient size of Russian troops deployed. How much power Russia would need to control at least major infrastructure hubs?

I personally think Putin will need to throw the entire 190,000-strong force on Kyiv to take it; just to surround the city of 3 million will take at least 100,000 people. Even if the Russians manage to take cities like Kharkiv, Odessa, etc. they have to leave forces there to maintain more or less stable control. Comparisons with Baghdad in 2003 are irrelevant- the Iraqi capital fell to the U.S. within days because it was barely defended. There are a lot of examples of modern urban fighting (like the 1945 battle of Berlin) when the Soviets had to put up to 2 million people to subjugate the city’s defenders and guard literally every corner of it. I personally think the forces gathered by Russia initially are not enough- they will have to get in more. I really hope Putin’s plans on Kyiv will hit a wall. He’s bringing a lot of heavy equipment (flamethrower systems
“TOS”, artillery, fighter jets, tanks, etc.), but I don’t think he’s bringing enough. And even if Russians cut supplies to Kyiv, it will also put their own soldiers into trouble, they would have to secure supplies of food, water, and ammunition (urban fighting on average requires 4 times bigger usage of it than regular warfare).

Urban warfare brings much more casualties than any other type of conflict. Given that Russia’s losses have already been quite heavy, and if this trend continues, Moscow may simply not be ready to do everything it takes to capture Kyiv.

Given that the number of troops, overall preparedness of Russia, etc. don’t seem enough to win a conventional war, don’t you think that Moscow may try to raise bets and force NATO to get involved, use unconventional weapons, etc.?

When it comes to the geopolitical stage on which I’m not the biggest expert, I would like to emphasize the following. Putin has already taken a big risk invading Ukraine, he pushes a narrative that they came to “liberate” Ukraine and continues to make absurd statements (starting from the alleged goal of the campaign- “to liberate Ukraine from the Nazi regime”). Putin may have miscalculated risks related to military losses, sanctions, consequent economic damage, etc. But Ukraine is not a NATO member and neither is it a nuclear country. In my opinion, the Russian president is not crazy or irrational. Most probably, his nuclear posturing is meant to make other countries stay out (abstain from a direct conflict with Russia). Nobody has yet crossed the line, which Moscow has announced to consist of establishing a no-fly zone over the Ukrainian territory or its part). I don’t think it will happen since it will mean fights between Russia’s and other countries’ jet fighters. The question is if Putin takes a different approach- to cause more civilian casualties and war crimes in order to win through fear, would that change the geopolitical landscape? I think so- even if Russian officials claim they strike on legitimate military targets, there will be a lot of civilian victims that will keep pushing other countries to get more actively involved. The escalation may lead Putin to overreact and risk too much- in this scenario he is likely to face a very unstable situation within Russia. If Putin doesn’t manage to maintain enough support from oligarchs and domestic power groups, we may see a dictatorship falling apart.