Russia and China loom large in the German 2021 election platform 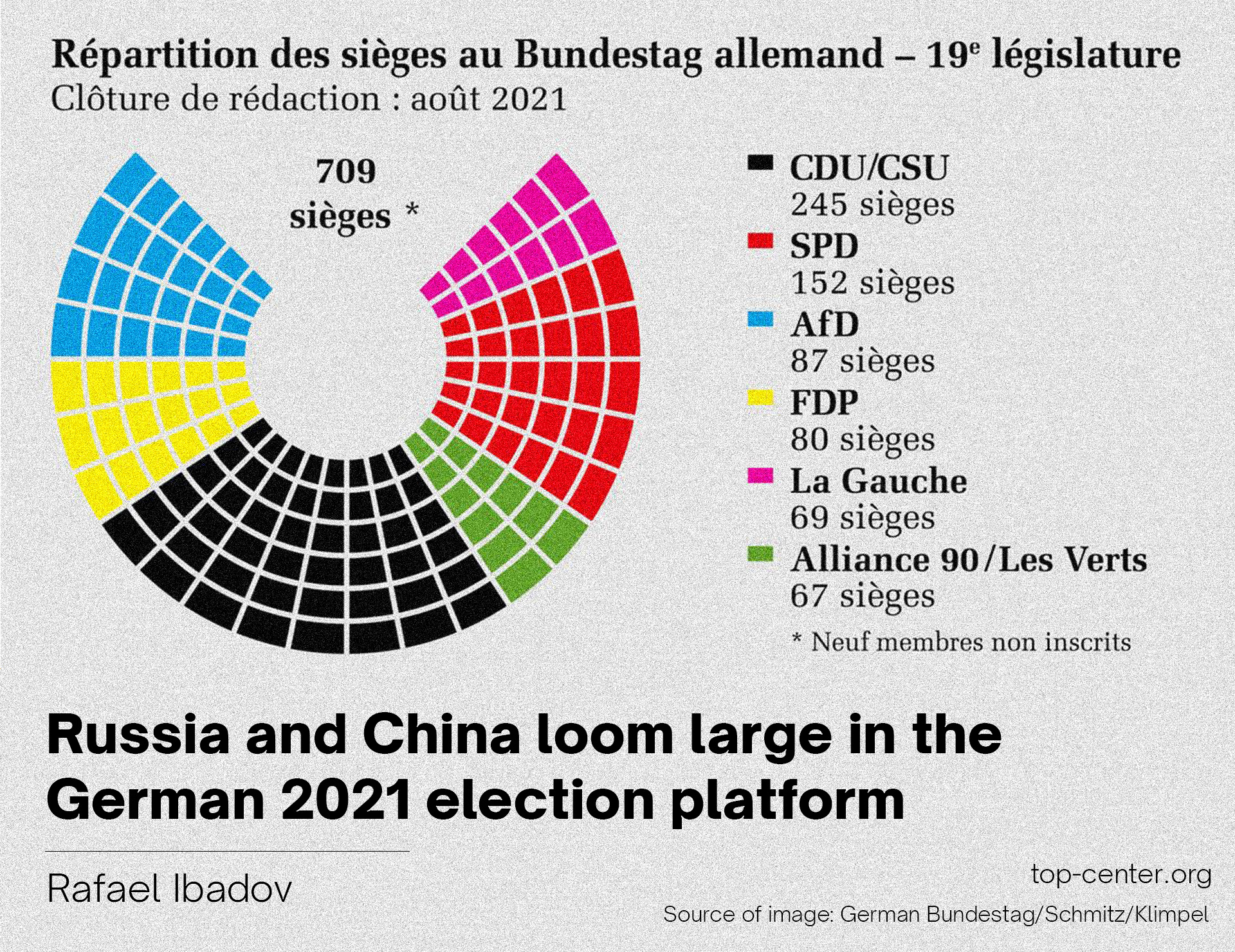 In the last 16 years of Angela Merkel as Chancellor, the Federal Republic of Germany has developed a comprehensive foreign policy model based on the promotion and consolidation of European values within and beyond the EU. The foreign policy trajectories include commitment to the transatlantic partnership, European integration, and reinforcement of peace and security worldwide. Coping with numerous challenges along her chancellorship, Merkel has proven to be capable of crisis management and achieved dialogue with Russia and China despite complex bilateral relations in the past. At the end of October 2018, Merkel announced that she would not run as the top candidate of the CDU in the 2021 federal elections. This paper deals with the foreign policy objectives of three German parties (the Union, SPD, and Alliance 90/theGreens) regarding the Russian Federation and PRC in the wake of upcoming elections in September.

In general, when it comes to foreign policy, the German parties can be divided into two camps. While the Union (CDU/CSU), SPD, and FDP adhere to the guidelines that have already been processed, the Greens, the Left, and AfD strive for substantial changes in foreign policy trajectories.

CDU/CSU
The Union sees German foreign policy primarily as an integral part of multilateral cooperation between NATO, the EU, the United Nations and the OSCE. In their common Election Program (Regierungsprogramm 2021) published on 21 June 2021, the CDU/CSU dedicated two chapters to their foreign policy initiatives. Section 1.4 of the first chapter, called "Stability in whole Europe", emphasizes the need of strengthening eastern partners and restoring the European peace order, which was disturbed by the illegal annexation of Crimea by Russia. Furthermore, CDU intends to engage Russia constructively and resolutely. Accordingly, the party perceives Moscow’s constant cyberattacks, disinformation and propaganda on federal media as a potential threat to the security of NATO allies. On the other hand, it also calls for further dialogue and cooperation in areas where interests coincide (e.g. energy, Iran, and climate change).

According to the CDU's chief candidate Armin Laschet, maintaining clarity concerning Russia does not rule out broad cooperation perspectives. In his interview with the Deutsche Welle (DW), he made it clear that Germany's Russia policy is embedded in European Russia policy. Concerning the Nord Stream 2 pipeline, the party candidate believes that this project will contribute to further prospects for bilateral cooperation with Russia. But Laschet has also explicitly emphasized that this project should not lead to geopolitical disadvantages for Ukraine. Overall, Laschet stays committed to the so-called “Pressure-plus-Dialogue'' double strategy worked out by his predecessor Merkel.

Another significant point highlighted in the 1st chapter of the election program concerns China. As noted in section 1.6, "China Auf der Augenhöhe begegnen": "The greatest challenge in foreign and security policy today emanates from the People's Republic of China''. The Union confirms China's controversial position in international affairs and further notes that China exerts influence on other countries through investments in technology and infrastructure, thereby creating geostrategic dependencies. Accordingly, CDU/CSU stand for:

●   protection of intellectual property, high technology and data to avoid dependence on Beijing
●   partnership within the framework of fair competition under the same conditions and with the principle of reciprocity observed
●   a European China strategy and a common approach by the West

As in the case of Russia, Laschet adheres to a policy of dialogue and mutually beneficial cooperation with China, urging the rest of the EU and NATO to renounce the logic of the Cold War. Moreover, he proposed not to address the human rights issues publicly, using aggressive rhetoric. Instead, he suggested discussing human rights violations privately with leaders, at the table of negotiations.

SPD
A comparison of foreign policy trajectories of the Union parties and the Social Democratic Party (SPD) reveals positional similarities in different external questions. In this regard, the SPD demonstrates its willingness to cooperate with Russia and China on a broad spectrum of economic and strategic issues. Therefore, they are pursuing the goal of a new European Ostpolitik (eastern policy) that focuses on a coherent, unilateral EU policy towards Russia. As the top candidate for SPD, Olaf Scholz said, Russia must accept that “the rule of law and not the law of the mightiest applies”. Thereby, the candidate for SPD acknowledges that the geopolitical environment requires new strategies.

In the context of relations with China, Scholz believes that it would be optimal for Germany to continue Merkel's course. Nevertheless, the party differs from the Union in that it has a clear stance towards China and the human rights violations against minorities, especially against Muslim Uighurs. With regard to Hong Kong, the German Social Democrats support the "one country - two systems" principle, which can be traced back to the joint Chinese-British declaration of 1984. The sanctions imposed by China on ten people, including members of the European Parliament, academics and four renowned organizations that have expressed criticism of the human rights conditions in China, are unacceptable, writes party member Nils Schmid. The party expressed its solidarity with the sanctioned individuals, but there was no talk of retaliatory sanctions.

Another controversial issue on the German-Chinese strategic agenda concerns the German frigate Bayern’s (F217) departure for operations in the Asia-Pacific region until next year. A member of SPD since 1989, and a strong proponent of social democratic values, the German foreign minister Heiko Maas has commented the departure of the frigate as a decisive step towards the promotion of rules-based international order.

The Greens
In its program, the Greens emphasizes the protection and enforcement of human rights at the international level as a model for its foreign policy. According to the Greens,  states like China and Russia are forcing the systematic undermining of human and civil rights with their authoritarian hegemonic posturing. Greens condemn Russia’s militaristic approach towards the neighboring countries and intend to tighten the sanctions if necessary.

Another aspect of bilateral relations highlighted in the Program and explicitly addressed / criticized by the top candidate Annalena Baerbock concerns the Nord Stream-2 pipeline project. In this regard, the Greens believe that the new project does not correspond to the energy and geostrategic interests of the European Union and doesn't contribute to climate protection which is  one of the founding principles of the Alliance 90.

The Greens  also call for a harder course against China. It  implies regulatory measures in trade and investment agreements and pressure on China to enforce compliance with sustainable production standards. Mrs. Baerbock has condemned the PRC for committing atrocities and systematically violating human rights in Xinjiang, Tibet and increasingly also in Hong Kong. The Greens stand against structural, and cultural violence applied against the locals in these regions and reject products from forced labor flowing into  the German market. Furthermore, Mrs. Baerbock suggested that the flow of forced labor goods could be regulated by a European supply chain law.

While the younger voters, who are more committed to climate and human rights protection, favor Baerbock’s initiatives, the political class views the politician’s strategies rather skeptically and perceive her statements as a maneuver of distraction.

Conclusion
Based on the mentioned initiatives of the party candidates and their election programs, numerous trajectories for both dialogue-oriented and provoking steps can be identified. In general, two different foreign policy objectives can be clearly observed. The first follows the course of economic and strategic cooperation and dialogue in the field of human rights and international law. This course implies prospects for sustainable peace and a balanced approach to deal with the rivals. The second objective is based upon the vision of Germany as a guarantor of European values and global human rights protector. Whether the Federal Republic will be able to find the right balance between its geopolitical interests and normative aspirations remains to be seen. 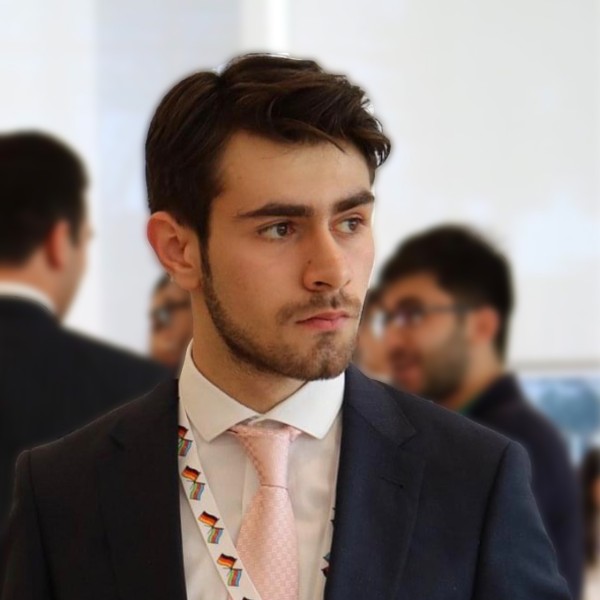 Rafael Ibadov is a political sciences student at the Free University of Berlin (FU Berlin). Before his academic studies in Germany, he studied International Relations at Baku State University for one year. His research areas include the Political System of Germany, European Integration and International Political Economy.