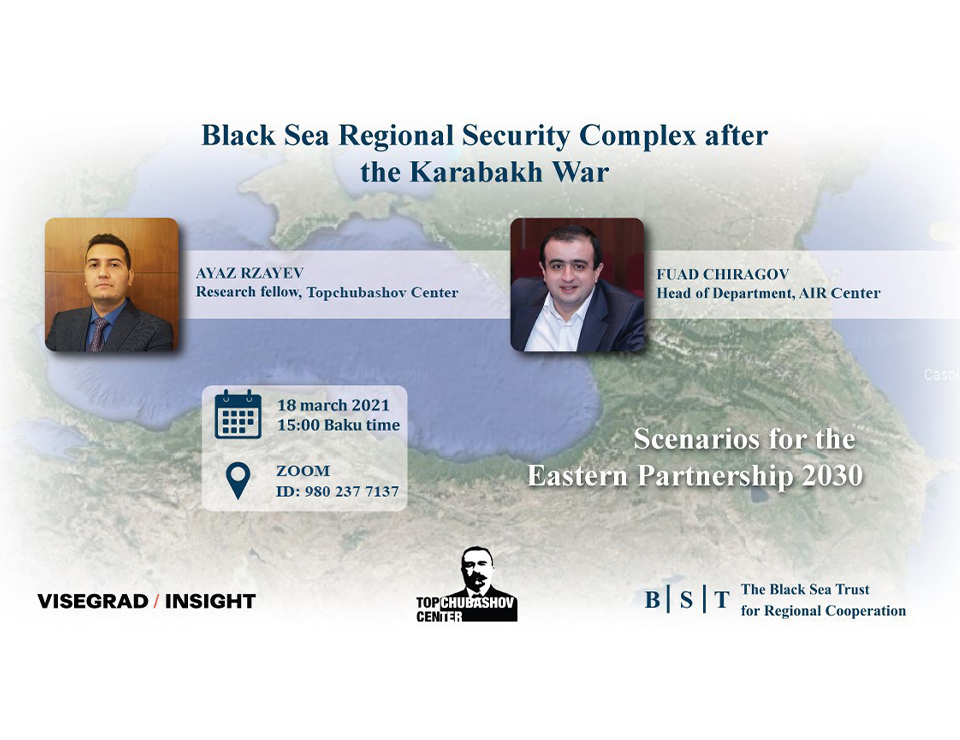 On March 18, as part of the Visegrad Insight series of scenario-building events on the Eastern Partnership space for the next 10 years, Topchubashov Center in Baku with the support of the Black Sea Trust for Regional Cooperation initiated an online discussion on the “Security Complex in the Black Sea Region after the Karabakh War”. The discussion was moderated by Rusif Huseynov, Director of the Topchubashov Center, while the key speakers were Fuad Chiragov, head of Regional Security Department at the Center of Analysis of International Relations (AIR Center) and Ayaz Rzayev, research fellow at the Topchubashov Center.

Mr. Huseynov opened the discussion with brief introductory remarks on the changing geopolitical realities in the wider Black Sea basin after the Second Karabakh War and invited the speakers to comment on the new power configurations in the region and the ways the participating countries can benefit from them. According to Mr. Rzayev, in the post-Karabakh War period we see a totally different geopolitical landscape with Turkey emerging as an assertive player, Russia increasing its clout through deploying peacekeepers to yet another post-Soviet country (Azerbaijan), and the West being sidelined by the regional major powers. In this context, each country will look for ways to maximize security in such a complex region and the emergence of security communities may provide an ultimate platform to create win-win scenarios for both small but active geopolitical players such as Georgia, Ukraine, and Azerbaijan and regional powers such as Russia, Turkey, and Iran. Mr. Rzayev put specific emphasis on the compartmentalization of policy issues that would bring the otherwise adversarial states together to work on cooperative projects in the future. For the expert, it would highly contribute to the emergence of trust among the participating countries and lead to the creation of a more peaceful regional security environment.

Building on Mr. Rzayev’s arguments on security maximization, Mr. Chiragov directed the audience’s attention to Turkey’s changing role in the geopolitical developments in the wider Black Sea basin. According to Mr. Chiragov, the ever-existing status quo and Russia’s traditional balance of power policies with regard to Armenia-Azerbaijan conflict over the Nagorno-Karabakh conflict is the thing of the past as Turkey asserted itself as a direct participant in the ongoing processes. On the other hand, the fact that Turkey has more vibrant economy and easier access to the global economy gives credit to the argument that compared to the other resource-based major economies in the region (Russia and Iran), Turkey has broader chances to deepen economic partnership with regional countries such as Ukraine, Georgia, and Azerbaijan to the detriment of competing great powers. When it comes to the implications of potential leadership change in Turkey for evolving Azerbaijan-Turkey alignment, the analyst did not exclude minimal readjustments but noted that Turkey would not miss this unique moment to further strengthen its hand in the region.

However, Turkey and other regional powers do not operate in a vacuum as some external players may pose certain threats or offer opportunities for regional security cooperation. Mr. Rzayev referred to regional integration projects proposed by China and Russia and highlighted how the divergent approaches among the Western countries toward these projects precluded effective foreign policy measures to be  taken to neutralize threats emanating from them. It could clearly be seen in the case of negative attitude by most Central and East European countries toward the increasing Chinese influence in the continent while some major economies in Western Europe shied away from direct criticism of China mostly due to the economic considerations. The similar pattern could be observed in the EU-Russia relations where the lack of a united approach to Russian assertiveness hampered the EU’s ability to come up with effective policy proposals for regional cooperation. According to Mr. Rzayev, even if the EU attempted to strike a right balance between realpolitik and democratization policies in its latest strategy papers, it remains to be seen whether it will be able to effectively apply them in real life.

Georgia is the country, arguably, with the highest stake in recent geopolitical developments in the Black Sea region. But Mr. Chiragov did not agree with the argument that with the opening of new transport corridors between Azerbaijan and Armenia, Tbilisi would lose its pivotal position for regional transportation networks. Energy and transport infrastructures connecting Azerbaijan to Turkey and the global market runs through the Georgian territory and it would be too costly to change it at least in the near future. At the same time, Mr. Chiragov stressed the West’s incompetence at responding to Georgia's pro-Western aspirations and the way it could affect other countries’ perception of the West as a reliable partner in regional security affairs.

Responding to a question from the viewers, Mr. Chiragov then evaluated the newly-emerging patterns in Russia-Turkey relations. Drawing on Joseph Nye and Robert Keohane’s “complex interdependence” approach to great power relations, the expert mentioned that Moscow and Ankara used multiple channels to successfully cooperate on different policy areas while having divergent interests in conflict centers from Ukraine to Syria. To be more precise, Turkey’s deepening cooperation with Russia on economic and military issues did not prevent it from challenging Russian positions in Ukraine, Georgia, Syria, etc.

Lastly, Mr. Rzayev commented on the geopolitical implications of the Biden presidency in the United States for regional security and the possibility of the creation of US-led regional coalitions against the resurgent regional players. According to the expert, while the Biden administration is new and yet to write down its policy proposal for the US goals in the region, one thing is clear that this region will not be the top priority for the US. China and the Asia-Pacific region will continue to be at the centre of America’s global focus and many will depend on the way the new National Security Council will be organized. Finally, increasing tension between the U.S. and Russia, especially after President Biden’s calling Vladimir Putin a “killer” does not bode well for the regional countries as it will put them in an unrewarding crossroads where they have to calculate carefully to emerge from this fallout with the minimum damage.