From a civil war to a proxy war: What is going on in Libya? 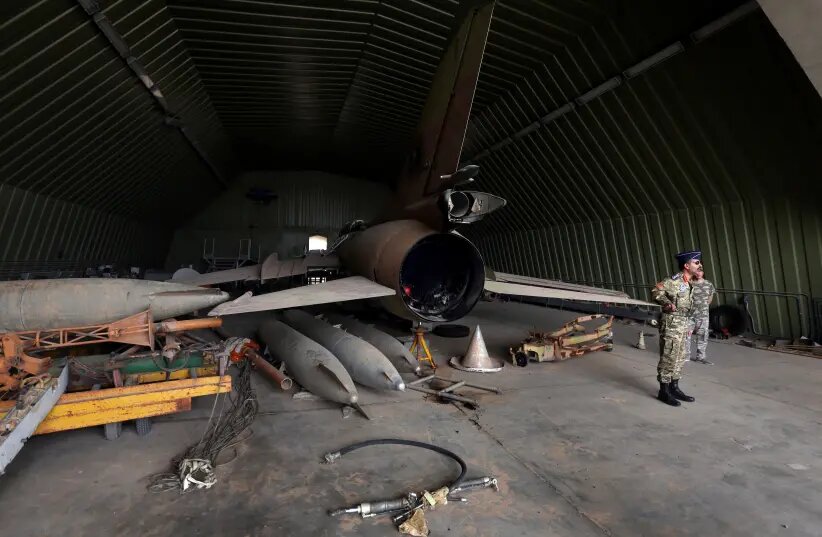 A series of events has changed the power balance in the Libyan conflict since early May. Launched by the armed forces loyal to Khalifa Haftar, the large-scale assault targeted at the central government in Tripoli has failed. This became the second heavy defeat of Haftar's forces. After increasing their maneuverability with the support of the Turkish military the central government forces defeated the Haftar army in summer 2019 in the city of Gharyan, which has great strategic importance. Last week, the Haftar forces at the Al-Watiyah air base southwest of Tripoli were destroyed and the base was captured by the central government in a counteroffensive, particularly with the support of Turkey`s unmanned combat aerial vehicles. As a result of this victory, the one-year status quo has changed in favor of the central government. However, the 6-year-old Libyan Civil War is still far from a constructive solution process. Conflicts in a country with the largest oil reserves in Africa are becoming one of the most complicated proxy wars in the Middle East.

Processes that led to the Civil War

Currently, two different governments are fighting for power in Libya, with each being supported by various armed groups and foreign forces operating in the country. After the killing of former leader Muammar Gaddafi in 2012, a central government (parliament) called the General National Congress (GNC) was established in Libya. In 2014, a military coup attempt by the Libyan National Army (LNA) under the command of Khalifa Haftar failed. Having not been able to capture the capital, Tripoli, these military forces retreated to the city of Tobruk in the east of the country, where the House of Representatives (HoR) was formed under Haftar. Signed in December 2015, an UN-brokered peace agreement was to put an end to the armed clashes between GNC in Tripoli and HoR in Tobruk; the Government of National Accord (GNA) was established in Tripoli. However, Haftar withdrew his recognition of the GNA and launched large-scale operations on the pretext of clearing Tripoli from radical Islamist groups in 2016. Backed by the world's powerful countries, Haftar`s army has seized most of the country's territories over the past three years and commenced an all-out attack on Tripoli to deliver the final blow in April 2019.

Khalifa Haftar, once Gaddafi's closest ally, was declared the main culprit of the defeat in the Libya-Chad war and was exiled from the country. After emigration to the U.S., he established good relations with the Central Intelligence Agency (CIA) and became a dissident to Gaddafi. Haftar reappeared in Libya during the events that led to the overthrow of Gaddafi in 2011 and rose rapidly within the Libyan army with the support of the West. Haftar's attempt to seize power in 2014 was directly related to the developments in Egypt, where the Commander of the Egyptian Army, Abdul Fattah al-Sisi, who came to power by overthrowing the Egyptian President Mohammed Morsi, had increased the pressure on the Muslim Brotherhood (MB), Morsi's major supporter. The MB was also the key factor at the General National Congress in Libya. Therefore, there was a need to implement the Egyptian scenario in Libya, too. The attempt in Libya failed though. After the death of King Abdullah of Saudi Arabia in 2015, the MB began to face more severe pressure in the Gulf countries. The forces loyal to Haftar found the opportunity to reactivate in Libya and this time, his ambitious attempt was directed by the Prince of the United Arab Emirates (UAE), Mohammed bin Zayed. In addition, following the appointment of Mohammed Bin Salman as the Saudi Crown Prince in 2017, the campaign against the MB became even harsher. Preaching the Sunni-Ummah ideology, the MB demands the abolition of monarchies and the establishment of sharia-based law systems in the Arab world and uses anti-Western, anti-Israeli rhetoric. Gulf monarchies such as UAE and Saudi Arabia, which have close ties with the West, try to strengthen Arab nationalism against the MB and are supported by the United States and Israel. Representing Arab nationalism in Libya, Haftar is, therefore, backed by the U.S., Israel, the United Arab Emirates and the Kingdom of Saudi Arabia. However, the U.S. and Israel only provide political support to Haftar. Since the election of Donald Trump as President, Washington has been unwilling to directly partake in military conflicts.

France and Russia are trying to fill the military vacuum caused by the cautious U.S. strategy in Libya. France is interested in maintaining its influence in North Africa and preventing the spread of the revolutionary mood to other African countries. For these reasons, Paris provides political, economic and military support to the Haftar forces. Instead of direct intervention in the Libyan conflict, Russia strives to increase military trade with Haftar. The revealing of Russian-made Pantsir missile systems at the al-Watiyah airbase, which was seized by government forces last week, proves this trade. However, a group of Russian mercenaries, Wagner, is reported to be on the front lines in Libya to support the Haftar forces. That the Wagner Group joined the conflict without the Kremlin's approval sounds unconvincing. With the aim to be closely involved in Libya's future political and economic life, Russia, nevertheless, maintains relations with both belligerents. The Russians even mediated Moscow negotiations between Haftar and the GNA head Fayez al-Sarraj last January which ended with no result.

Supporters of the Government of National Accord...

Formed by the UN initiative, the Tripoli-based interim government, GNA, is is internationally recognized as the legitimate government of Libya. Yet, it had not been able to receive economic and military support from global and regional actors for a long time. Italy, a major shareholder in Libya's economy during Gaddafi's rule, is backing the Sarraj government to regain its pre-civil war positions. The Italians are concerned about the strengthening of many regional powers, including France, in Libya via Hafter. Furthermore, Italy is also interested in preventing the mass flow of migrants from Libya.

The Gulf's rich country, Qatar is also an important sponsor of the Tripoli government. The interests of the Qataris in Libya are related to the MB, of which Doha is considered a major supporter and which is why it has been blockaded by its Gulf neighbors since 2017. Despite the support of Italy and Qatar, the main turning point for the GNA in the Libyan tangle happened due to Turkey's intervention.

It should be emphasized that Turkey actively supported the peace process in the early days of the GNA. However, after Haftar's forces seized most of the country's territory, Ankara has begun to provide a wide range of military support to the Tripoli government. Especially, since the direct intervention of the Turkish Army in 2019, important changes have taken place in the military process in Libya. What is Ankara`s motivation for the significant military presence in Libya? There may be two different geopolitical reasons: The first is to support political groups close to MB within the context of the Turkey-Qatar alliance. Establishing Turkey`s image of leadership in the Muslim world has been set as the main priority of Ankara's foreign policy under Recep Tayyip Erdoğan, with some experts calling this policy Neo-Ottomanism. To ensure this, there is certainly a need for influential religious soft power elements in the Arab world, with the MB probably being the most important one. Ankara's leadership claims have caused serious resentments in the Gulf monarchies, especially in Saudi Arabia, which strive to utilize Arab nationalism as a preemptive move against it. Within this rivalry, the overthrow of Mursi and Sisi's seizure of power in Egypt became a serious blow to Turkey's prestige in the Arab world. Therefore, the outcome of the Libyan process should be suitable for Ankara`s plans to repair Turkey`s image in the Middle East.

The second reason may be even more important in the geo-economic context. Upon the assassination of Gaddafi, the Libyan fleet withdrew from its positions in the Mediterranean. Having taken advantage of the situation, the Greek navy occupied the maritime sector belonging to Libya and deformed Libyan-Turkish maritime borders. Huge energy reserves in the Eastern Mediterranean were confirmed in the later period. Some energy blocs shifted to Greece`s area under the new border regime, which Ankara refused to accept. Referred to as the Eastern Mediterranean issue in international relations, this crisis has recently been the most important topic in Turkey's public agenda. In this context, the much-discussed "Blue Homeland" (Mavi Vatan) doctrine aims to ensure Turkey's presence in the Mediterranean. In their turn, Egypt, Israel, Greece, Cyprus, the Gulf states and the European Union cooperate to limit Turkey's activities in the Eastern Mediterranean. The fate of the EastMed project to transport Israeli Leviathan gas to Europe via Cyprus will depend on the outcome of the power struggle in the Eastern Mediterranean. In addition, both the United States and Russia do not want Turkey to become a dominant power and energy country in the Eastern Mediterranean. Washington is trying to defend the interests of its allies, especially Israel, and to prevent Turkey from becoming an independent decision-maker. Moscow is concerned about Turkey`s access to energy resources and does not want to lose the Turkish market, one of its largest energy consumers. Therefore, Ankara desperately needs the Tripoli government to restore its maritime borders and gain an important strategic ally in the Mediterranean. In December 2019, Turkey and Libya (GNA) signed agreements on the demarcation of borders and an exclusive economic zone. According to the agreement, Libya will regain the 40,000 square kilometres of sea area it has lost.

The border agreement signed between Libya and Turkey can be considered a great diplomatic victory for Ankara. Regardless of its affiliation, the political force that emerges victorious in the Libyan conflict will not be able to withdraw from this agreement as it would otherwise mean giving up on Libyan territories to Greece. Moreover, Turkish-Israeli relations have been softened in recent days, and it's reported that a similar maritime border agreement between the two countries has been discussed secretly. On the other hand, Turkey controls militarily and strategically advantageous positions in Libya, which allows it to remain defensive. In other words, it will be sufficient for Turkey to preserve the territories it presently controls in order to have a say in the future of Libya. Unlike in Syria, Turkey`s support to the legitimate government in Libya is more welcomed by the international community. However, in light of the economic difficulties Ankara has recently been facing, it is unclear how long Turkey`s strategy in Libya could be durable.

The situation on the Haftar`s front is more complicated. Frankly, it is hard to imagine that a 77-year-old strongman will play any role in the future of Libya. Furthermore, LNA's recent defeats have raised questions about Haftar's dream to soon become Libya's leader. His forces composed of Egyptian army soldiers, as well as mercenaries recruited from Chad and Sudan with the financial support of the UAE have very limited chances to capture Tripoli and Misrata. According to recent reports of the Turkish press, foreign countries supporting the LNA are looking for an alternative to Haftar.

Despite these developments, it should be emphasized that the main reward of the Libyan game, the oil fields are still under the control of Haftar…